While many jigsaw junkies enjoy making order out of chaos, Vancouver-based artist Tim Klein breaks the rules by playing the game his own creative way. After discovering that manufacturing companies tend to reuse the same shaped pieces for multiple puzzles, Klein decided to have some fun by combining the interchangeable parts to make his own montage puzzle art.

Klein prefers to use vintage puzzles from thrift stores and garage sales, across a range of themes and subjects. “The imagery in jigsaw puzzles published nowadays tends to be very busy, often consisting of densely-packed collages constructed with Photoshop,” says Klein. “But for my purposes, I favor puzzles from pre-digital years, when the picture was typically a photograph of a single subject, such as a galloping horse or a ballerina or the Empire State Building.” The random nature of Klein’s medium results in surreal artworks that might make you chuckle, but some also visualize deeper meanings.

In one puzzle mashup—made using pieces from two Golden Guild puzzles from the 1980s—Klein merges a North Carolina mansion with Mt. Jefferson, seamlessly merging nature with the manmade. In others, Klein comically mixes up puzzle pieces from animal photos, creating his own hybrid creatures. “I take great pleasure in ‘discovering’ such bizarre images lying latent, sometimes for decades, within the pieces of ordinary mass-produced puzzles,” reveals Klein. “As I shift the pieces back and forth, trying different combinations, I feel like an archaeologist unearthing a hidden artifact.”

Scroll down to see some of Klein’s mis-match creations and discover more of the artist’s puzzle portfolio on his website. 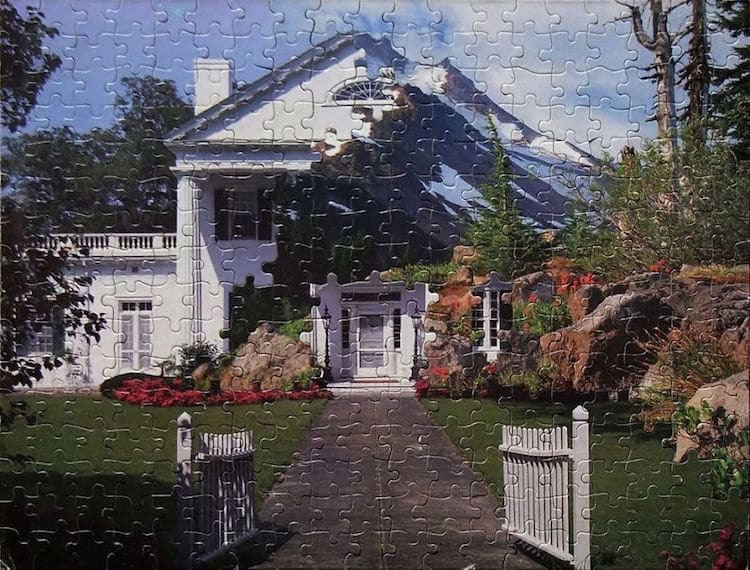 “Mountain Plantation”
This was the first puzzle montage I ever created, using pieces from two Golden Guild puzzles from the 1980s or ’90s. One puzzle showed the mansion at Orton Plantation, located in my boyhood hometown of Wilmington, North Carolina. The other puzzle showed Mt. Jefferson, near my current home in the Pacific Northwest. 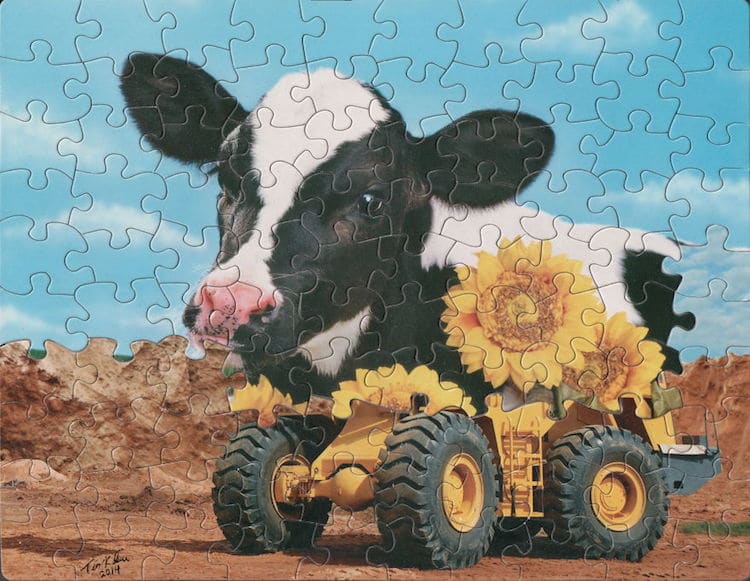 “How The West Was Won” 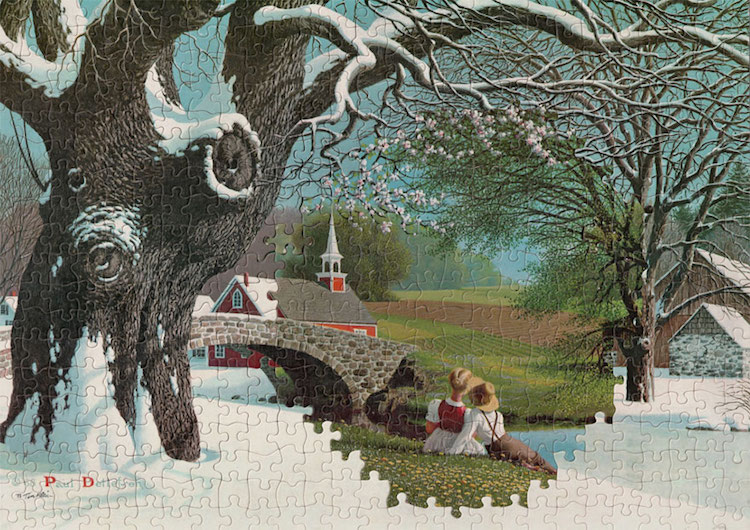 “Thaw (Warm Breath On A Winter Window)”
Perhaps this montage was too easy! After all, the pieces came from two puzzles showing the same scene. They were Milton Bradley puzzles from the late 1960s, taken from a set of “four seasons” paintings by Paul Detlefsen. (When I show this one in public, I credit it to “Tim Klein, after Paul Detlefsen”.) At the bottom of the “thawed” circle, where green spring meets white winter, the curvature of the puzzle pieces gives a nice melting effect. It’s as if you, seeing the winter scene through a window, have breathed upon the glass and magically revealed a glimpse of the warm spring to come.

“Bow Wow”
A diptych made from two miniature Springbok puzzles published in the 1980s, one showing a dog and one showing a clown saying “Wow!!” The two halves are inverses, each one using all the pieces not used in the other. This pair debuted at the Splendorporium gallery in Portland, Oregon, as part of a circus-themed exhibit. 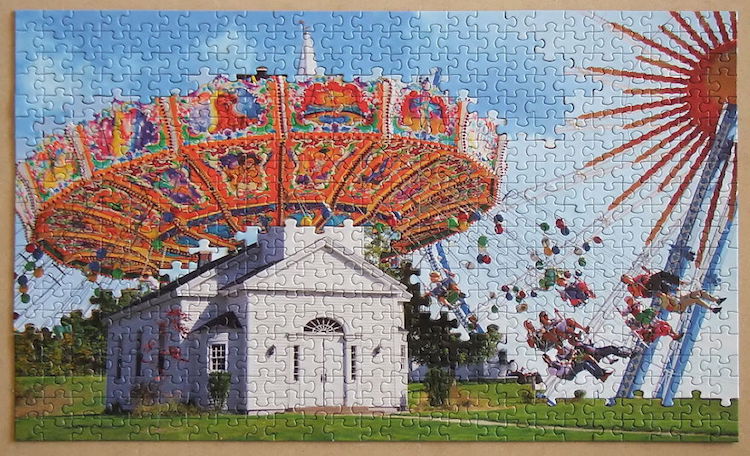 “The Mercy-Go-Round (Sunshine And Shadow)”
I made this montage by combining a Puzzlebug-brand puzzle showing a church with another one showing a carnival ride. I’ve been a bit surprised at the wide range of reactions it gets. Some people find it humorous, others find it affirming or joyful, and others see it as blasphemous or insulting. 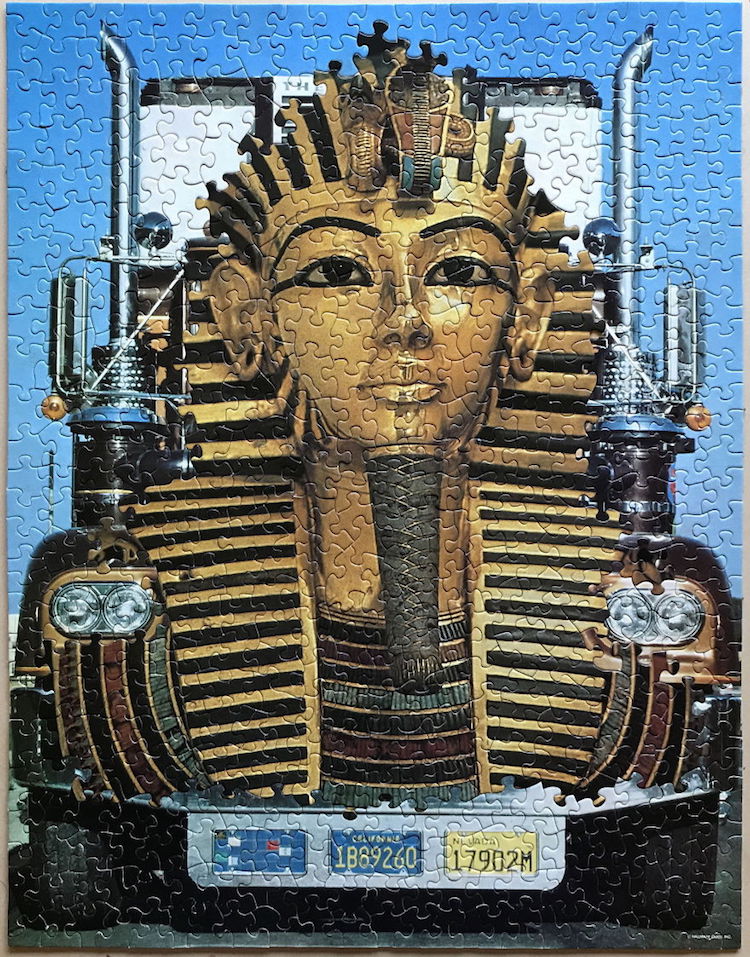 “King Of The Road”
Constructed from two Springbok puzzles from the 1970s.

When combined, each set is transformed to depict surreal landscapes or comical hybrid animals. “Were-Rabbit”
Made from the pieces of two small Puzzlebug brand puzzles, one showing a bunny and one showing a dinosaur under a full moon. 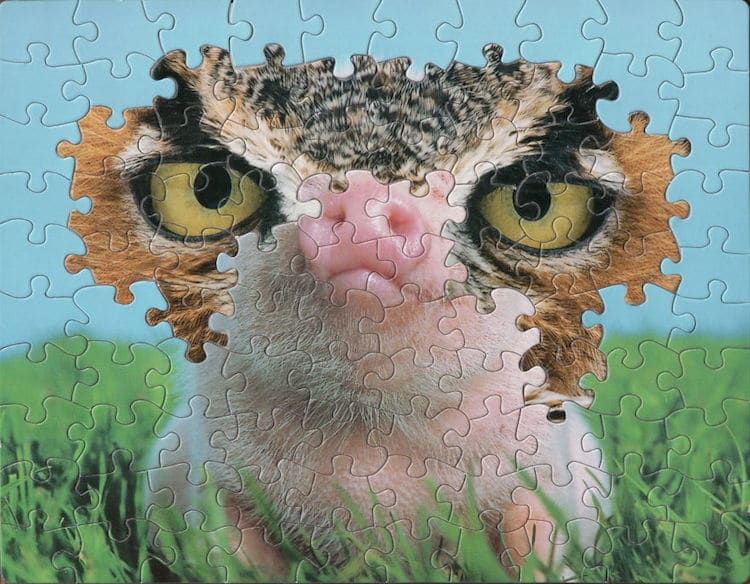 “The Dance Of The Bathroom Cleaning Fairies”
Made from two Springbok puzzles published in the 1980s. “White Elephant (Present And Future)”
Made from pieces of two Springbok puzzles published in 1978 and 1980. “Schools (Fishing For Answers)”
Made using pieces from two Hallmark puzzles from the 1970s, one showing a comically unsuccessful fisherman, and the other showing the answers to a blank crossword puzzle that was printed on the box. I like the fact that the school at the lower left has “arcana” at its core. (Aristotelian arcana, no less!) 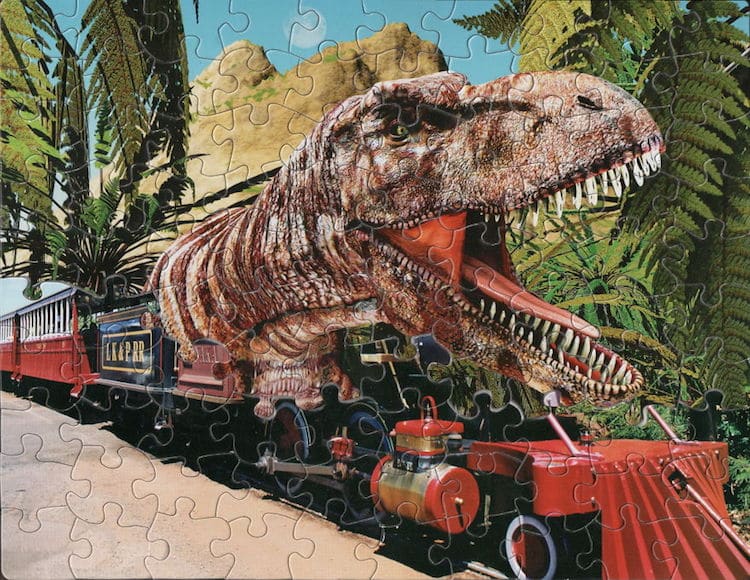 “The Other Side”
Made from two American Publishing Company puzzles from the 1980s. Most of my puzzle montages are in a single plane, with pieces from the two source puzzles intermixed. But in this one, the coins puzzle is on top of the puzzle containing the eyes, resulting in a two-layered piece. Thus, the eyes look into the viewer’s eyes from the other side of a wall of gold. 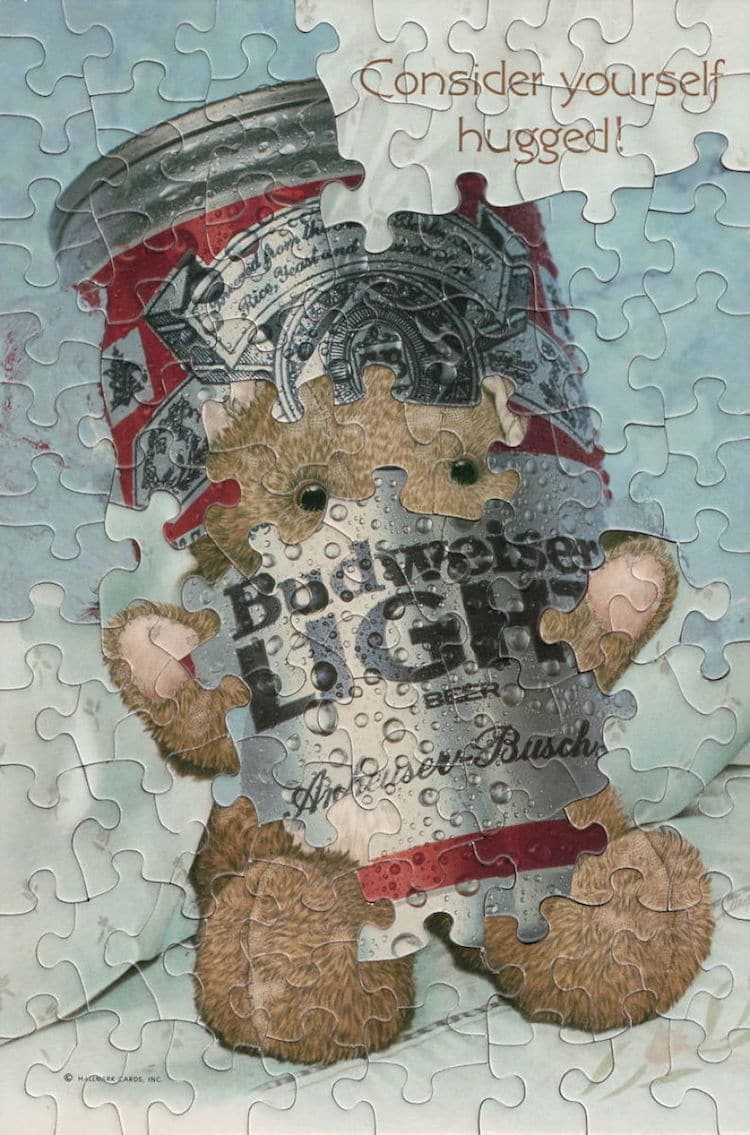 “Surrogate”
Made from the pieces of two small Hallmark “greeting card” puzzles from the 1980s. “A Modest Proposal For The Increase Of Attendance At Classical Music Concerts”
Made from two Springbok puzzles from the 1980s, one showing a horn and one showing cookies magically flying out of a cookie jar.

[via my modern met]

PrevPreviousnomadic, modular structure
NextWhat Makes People Buy OrganicNext
Get the best information from our knowledgeable, experienced staff to support you and your team. click here