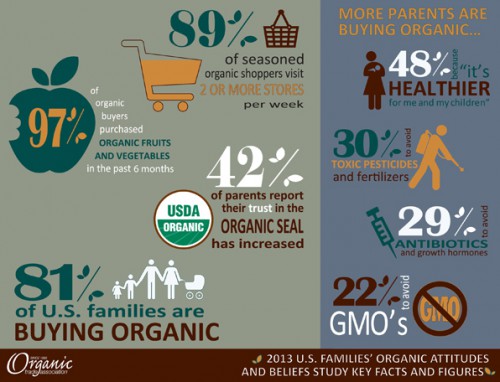 U.S. families are increasingly embracing organic products in a wide range of categories, with 81 percent now reporting they purchase organic at least sometimes. This finding is one of many contained in the Organic Trade Association’s (OTA’s) newly released 2013 U.S. Families’ Organic Attitudes and Beliefs Study, conducted Jan. 18 to 24, 2013.
“More and more parents choose organic foods primarily because of their desire to provide healthful options for their children,” said Christine Bushway, OTA’s CEO and executive director.
Not only are more consumers choosing organic products at least sometimes, but the majority of those buying organic foods are purchasing more items than a year earlier. New entrants to buying organic now represent 41 percent of all families—demonstrating interest in the benefits of organic food and farming is on the rise.
Produce continues to be the leading category of organic purchases, with 97 percent of organic buyers saying they had purchased organic fruits or vegetables in the past six months. Breads and grains, dairy and packaged foods were also frequently cited (all scoring above 85 percent) among those who purchase organic. Families choosing organic foods are increasingly important to retailers of all types, with organic buyers reporting spending more per shopping trip, and shopping more frequently than those who never purchase organic food.
Consistent with findings from previous studies, nearly half (48 percent) of those who purchase organic foods said they do so because they are “healthier for me and my children.” Additionally, parents’ desire to avoid toxic and persistent pesticides and fertilizers (30 percent), antibiotics and growth hormones (29 percent), and genetically modified organisms (22 percent) ranked high among the reasons cited for buying organic products.
Awareness of the USDA Organic seal has also grown, with more consumers more likely to look for the seal when shopping for organic products. Moreover, over 4 in 10 parents (42 percent) say their trust in organic products has increased, versus 32 percent who indicated this point of view a year ago. In fact, younger, new-to-organic parents are significantly more likely to report improved levels of trust in organic products.
“Consumer trust is on the upswing for organic as the gold standard when seeking to avoid toxic and persistent pesticides, antibiotics, synthetic hormones, genetically engineered ingredients, and additives,” Bushway added.
Study findings, gathered in partnership with KIWI Magazine, are based on responses from 1,239 U.S. households about their attitudes and behaviors related to organic foods. The report provides in-depth information about organic consumers’ demographics, purchase motivation, labeling comprehension, shopping patterns, and more.
The 2013 U.S. Families’ Organic Attitudes and Beliefs Study is available for purchase.