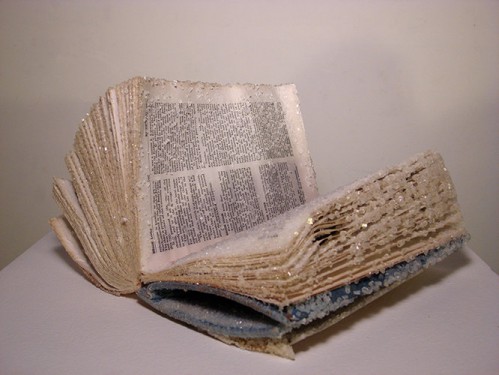 When was the last time you revisited your high school copy of, say, Catcher in the Rye or Crime and Punishment? (That long, huh?) However meaningful they’ve been to you, they’re likely shelved, blanketed by a thick patina of dust.
Artist Alexis Arnold, too, has put these kinds of books on ice. In her collection, glass-like crystals cling to bindings and pages.
Crystallized Books imagines what the library from might look like if recovered, albeit with some more contemporary titles (and a few magazines) thrown in. Arnold coats her hardcover volumes with a special solution that she takes up to a boil and then allows to cool; once hardened, the books are frozen in sculptural poses. The volumes are striking to look at, but of course, rendered useless as reading material. 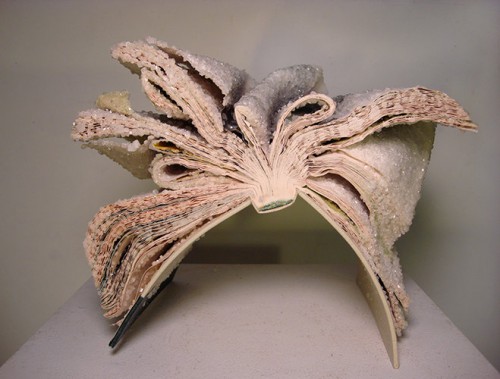 That’s part of the idea, Arnold tells Co.Design. On one level, her petrified objects form a “commentary on the peril of the printed book.” On another, they’re granting the publications immortality. “The crystals remove the text and transform the books into aesthetic, non-functional objects,” Arnold says, “leaving the stories to remain as memories.”
Pages are clumped together in thick crystal growths, liquid paste that looked like it was trying to flow downward. Dignified hardcovers are permanently half-opened, fixed ajar, while paperbacks and magazines assume more complex contortions.
“The books, now frozen with heavy crystal growth, have become artifacts or geologic specimens imbued with the history of time, use, and nostalgia,” says the artist. 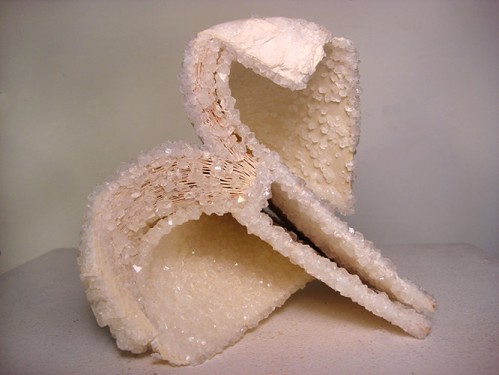 Arnold grows crystals on books, making them look as if the volumes are encrusted in a jacket of icy shards.

Using some DIY science, Arnold essentially recreates grand-scale geological phenomena in the short-term in her own kitchen. Its secret formula is adding laundry detergent (Twenty Mule Team Borax) to boiling water. Arnold dips the books into the super-saturated solution, turning them over while carefully manipulating their pages. She then leaves everything to cool, which contracts the water molecules and crystallizes the residual detergent matter. Once that happens, she drains the books and allows them to dry.
In the last few years, she has used the same method to crystallize everything from antique cookware to crab shells and even bicycle wheels, which she exhibited in a series of installations.
Books, however, are a favorite for both their malleability and their emotive power. “Specific books often hold very loaded meaning for people, triggering different interpretations of the sculptures,” she says. In fact, Arnold ended up donating many of her own dog-eared volumes to the process. 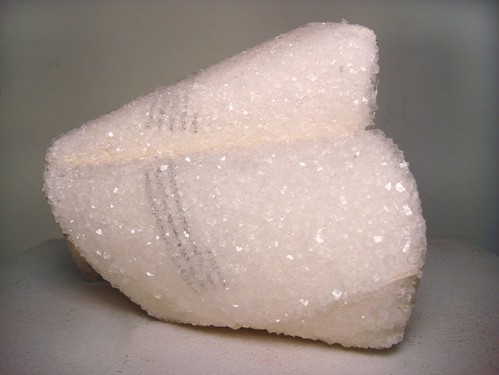 The crystals are made using a simple solution consisting of water and laundry detergent. 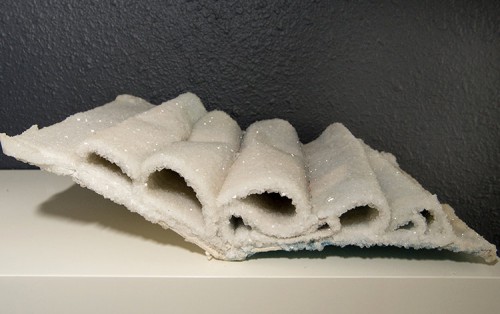 This super-saturated solution is heated, and the book is carefully dipped into the liquid. 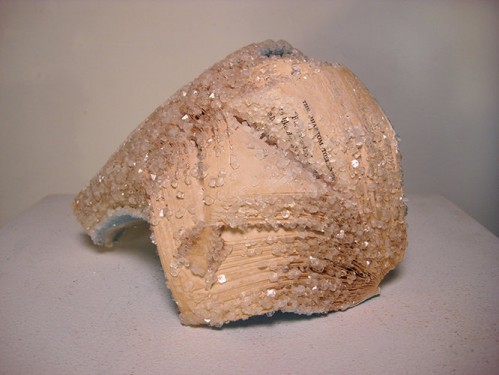 Arnold then carefully sculpts the pages to her liking. 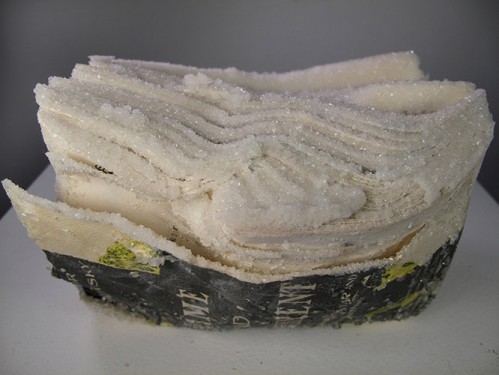 After it’s cooled, Arnold drains the book thoroughly and then photographs it. 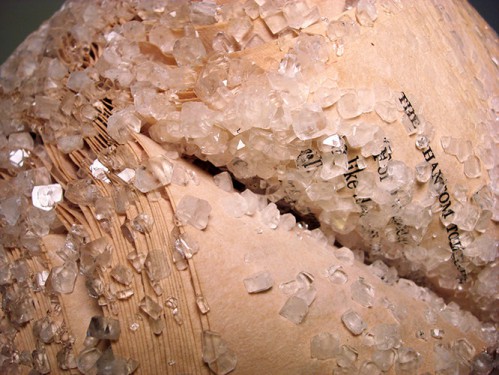 Everything is allowed to cool. The water molecules contract, and the remaining detergent molecules crystallize in glassy chunks. 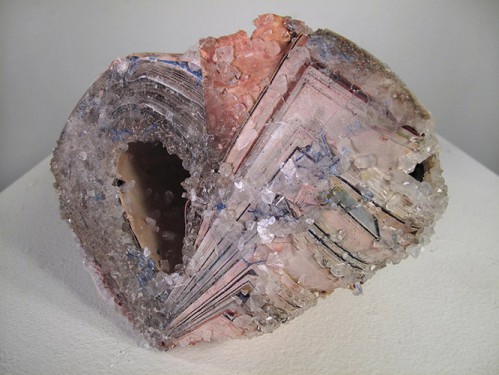 Paperbacks and magazines are coiled on themselves, creating a strange but striking kind of plasticity. 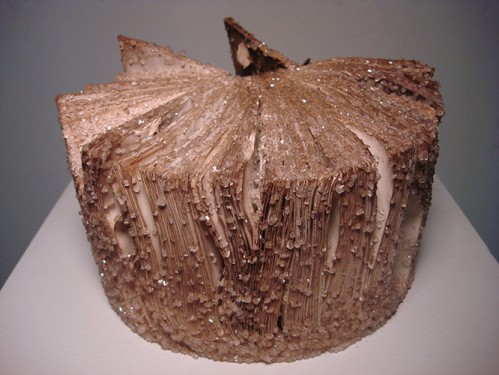 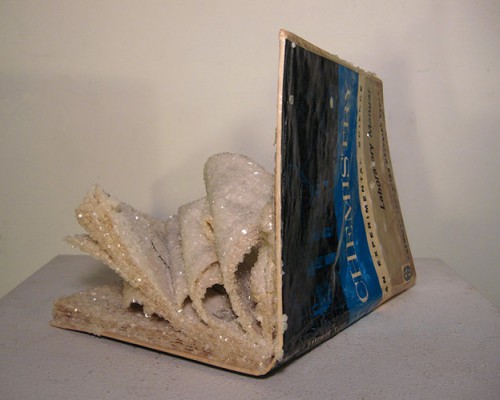 For Arnold, the project at least partly speaks to the decay of the book as an object. 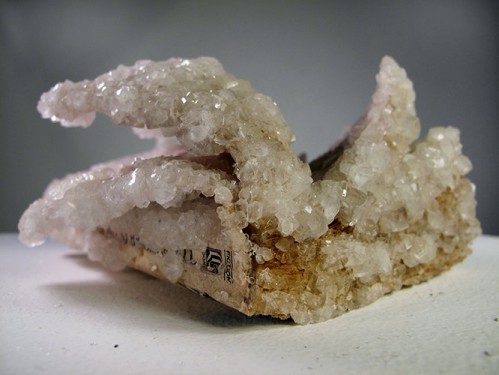 But it also represents a dynamic between the material form of the book itself and the text it contains. 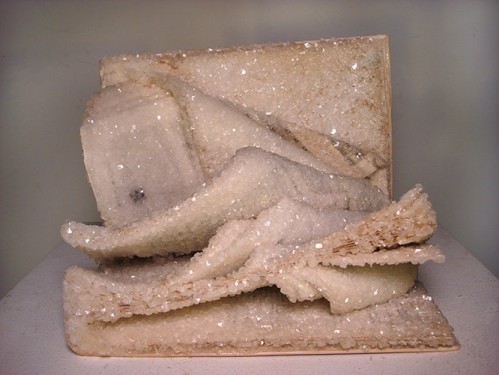 “The crystals remove the text and transform the books into aesthetic, non-functional objects, leaving the stories to remain as memories,” Arnold explains. 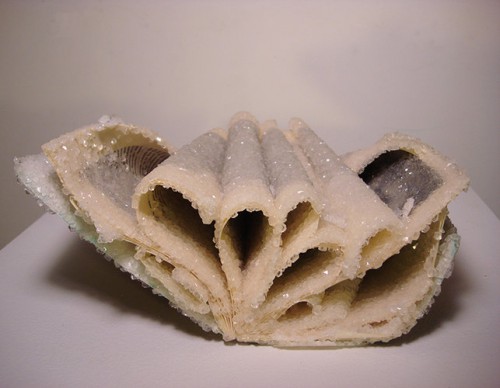 “The books, now frozen with heavy crystal growth, have become artifacts or geologic specimens imbued with the history of time, use, and nostalgia.”