kodak looks back for rebrand

In 1976, Kodak accounted for 90% of all film and 85% of camera sales in the US. The brand had dominated the analogue photography market for decades – it pioneered the use of transparent photographic film in the 1880s, introduced photography to the masses with its $1 Brownie camera in 1900 and drove a huge demand for point and shoot cameras with the launch of its Instamatic in the 1960s.
But in 2012, Kodak filed for bankruptcy. The company’s failure to embrace digital photography for fear of cannibalizing its film business had left it lagging behind its rivals, despite the fact that Kodak had invented the world’s first digital camera in 1975.
In an interview with The New York Times last year, its creator Steven Sassoon – a former engineer at Kodak – said he was forbidden from talking about the device or showing it to anyone outside of the company for fear it would cannibalize the company’s film business. “Every digital camera that was sold took away from a film camera and we knew how much money we made on film,” he told the NYT. “That was the argument. Of course, the problem is pretty soon you won’t be able to sell film — and that was my position”. 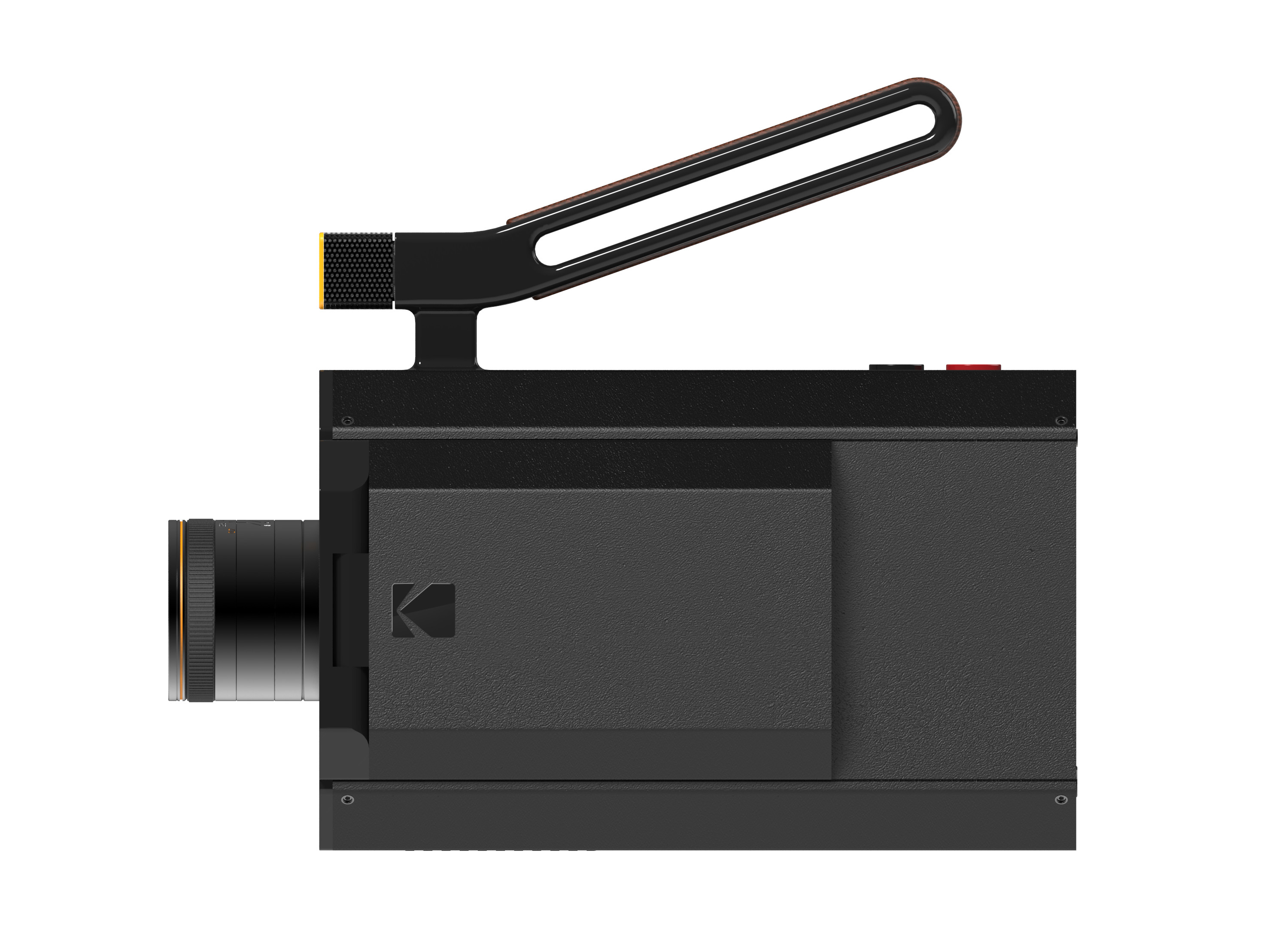 The new Super 8 camera. Kodak worked with Yves Behar to create it

A year after it filed for bankruptcy, however, Kodak was back on the stock exchange. It has since released a 360-degree camera and a low-cost smartphone, the IM5 and more recently, reinvented one of its best-loved products.
At this year’s CES in Las Vegas, the brand revealed a new Super 8 camera – an updated version of the Super 8 that combines digital and analogue technology. Designed by Yves Behar, the device features a digital viewfinder and sound recording, but uses Super 8 film.
Announcing the camera’s launch, Kodak said it formed part of a ‘Super 8 revival initiative’ which would also see the brand release new post-production tools and film developing services. 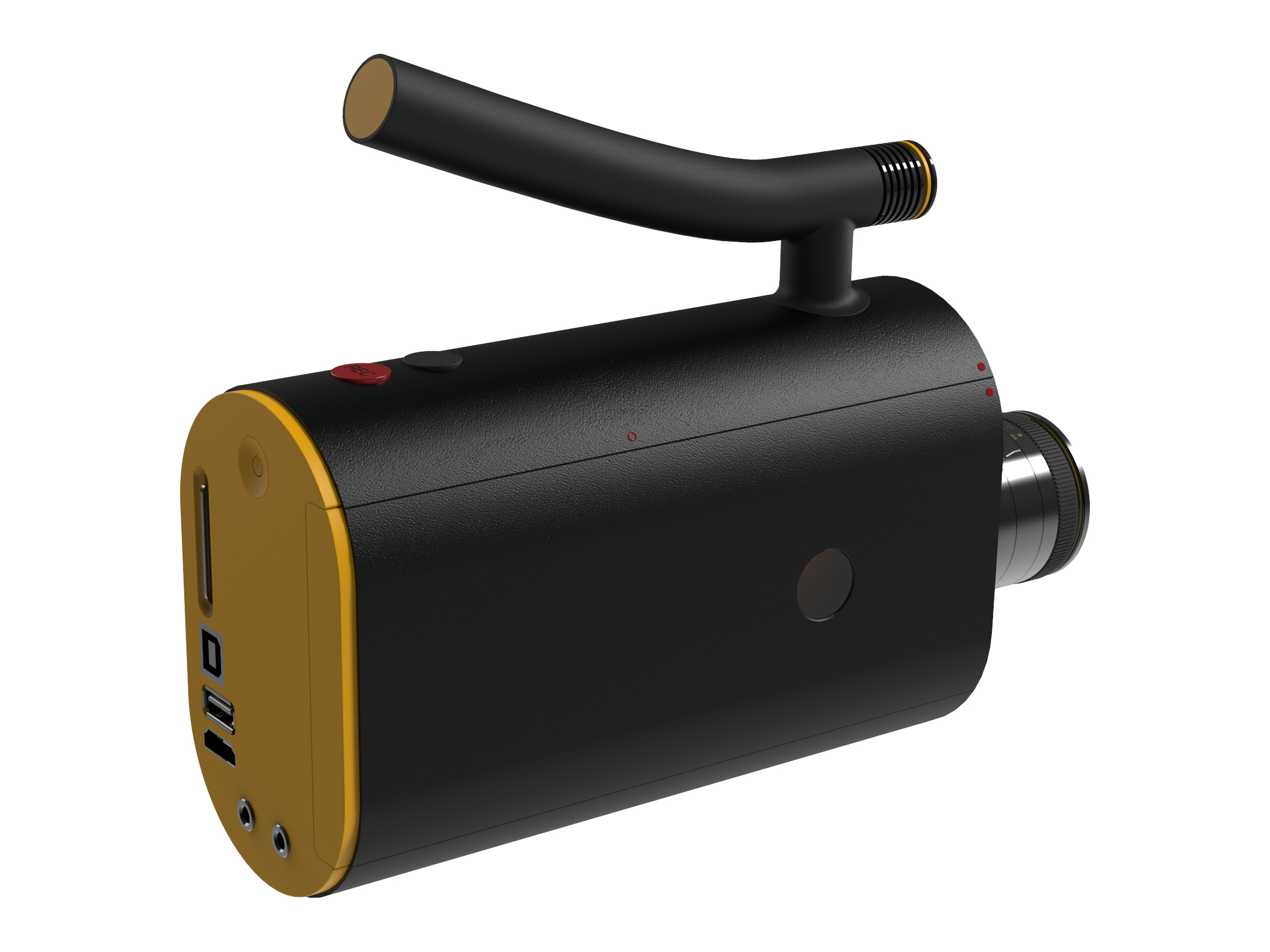 Its release created much excitement – due largely to the original Super 8’s legendary status among filmmakers. Directors from Quentin Tarantino to Steve McQueen, Steven Spielberg and Christopher Nolan all used Super 8s to shoot films in the early stages of their career.

In October, Kodak also launched a new logo based on the brand’s first official symbol: a red ‘K’ against a yellow background, which was designed by Paul J Oestreich in 1971. The logo was in use for 35 years but was replaced by a red word mark in 2006.
The new design was created by New York studio Work-Order and features Oestreich’s original K, with the word Kodak arranged vertically in sans serif type. The revival of the K also sees the brand bring yellow back to its visual identity – a color that appeared throughout its branding and marketing in the 1970s and 80s. 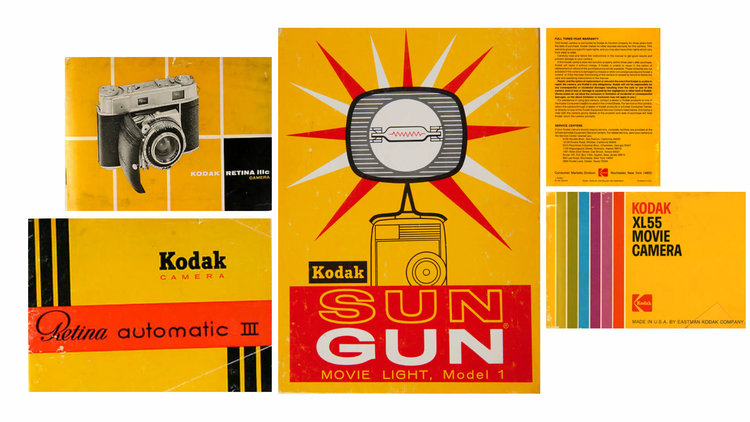 Kodak’s logos through the ages, and vintage marketing, via Work-Order.

“Since the early 20th Century, Kodak’s packaging and marketing materials have been blanketed in a warm yellow with red and black features. Our aim was to re-establish this strength and to never abandon the use of yellow on anything,”

The studio says the new design aims to bring a more unified look back to the brand – the K will appear as a manufacturer’s stamp on everything from batteries to camera boxes. 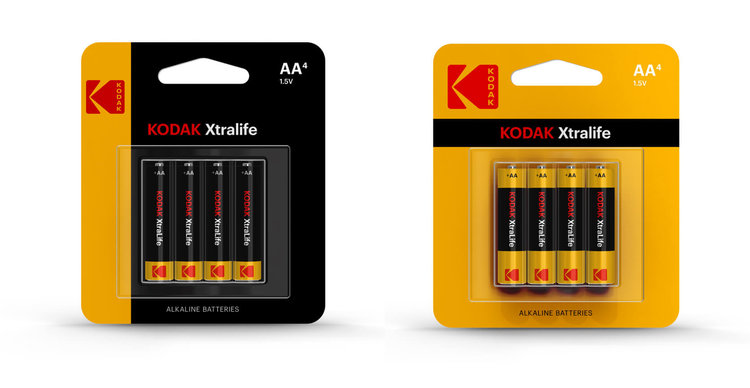 Also last month, Kodak launched the Ektra: a smartphone named after a Kodak camera from the 1940s. VP of global brand and creative Dany Atkins says its design was inspired by the Ektra camera’s leather and steel casing, telling CR: “Just like the S8, we wanted to modernize an icon. Kodak Ektra cameras were high-end, had many innovative features and are now extremely rare. The Kodak Ektra camera was the inspiration for [the smartphone’s] industrial design.”

Atkins describes the Ektra phone as ‘camera first’: “Kodak Ektra is very different to other devices on the market. It’s intentionally styled to look like a camera from the barrel on the right hand side that is reminiscent of 35 mm cartridges to the shutter button that takes you straight into the camera if you double tap it,” she says.
“We have embedded George Eastman’s ‘You press the button we do the rest’ ethos throughout the design and experience from the K-logo shutter to printing your pictures [users can order prints to their door via an app on the phone]. You get back a bit of the magic of the yellow envelope arriving through your letter box if you choose to print your photographs – it brings back some of the craft as well as the specialness.” 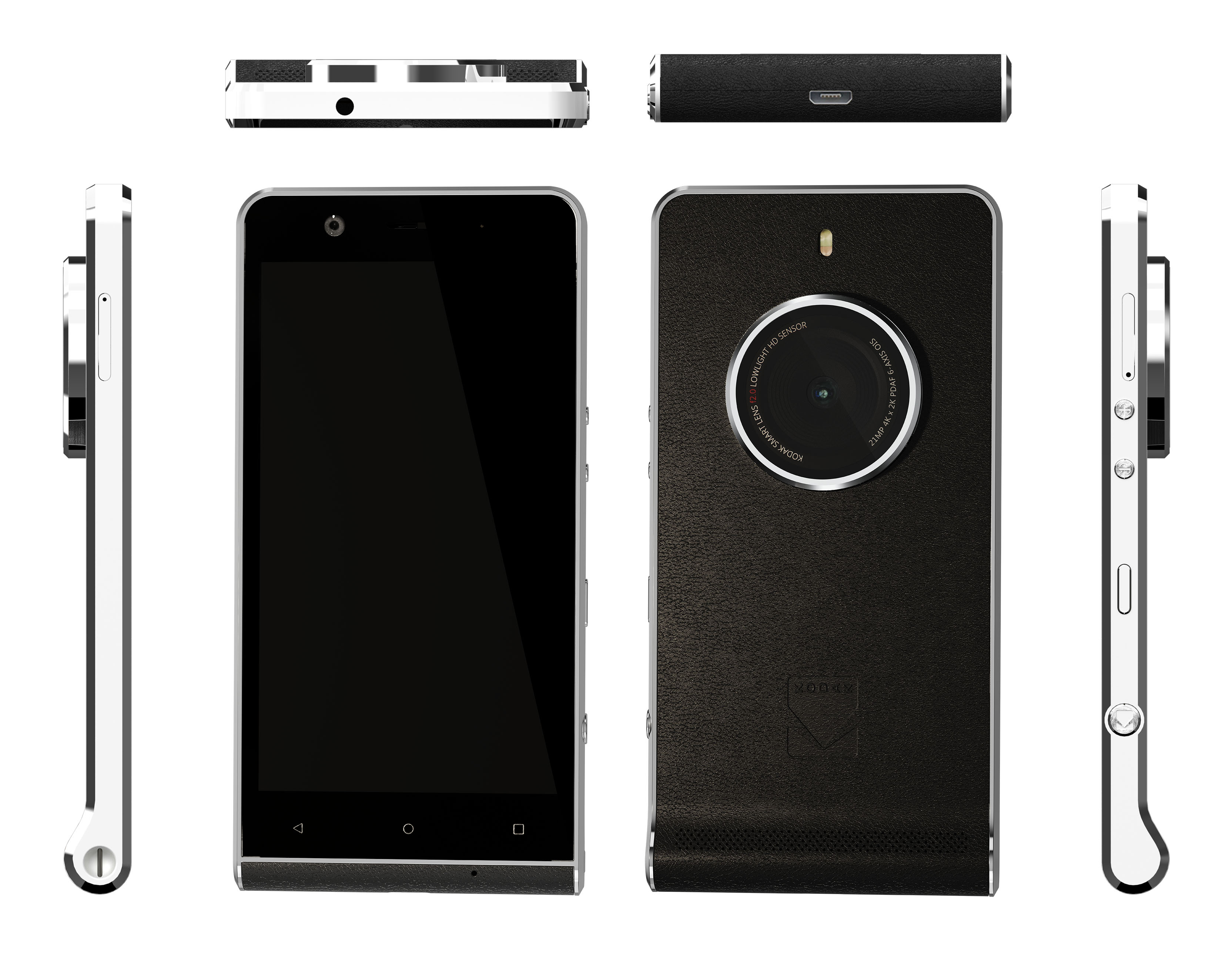 The Ektra smartphone. The phone will be priced at £449. Its design was inspired by the brand’s Ektra camera from the 1940s

Kodak lacks the heritage in the phone market that is has in photography but with many people abandoning cameras in favor of using their smartphones to take pictures, it’s a market the brand is keen to tap into.

“David Bailey famously said “the best camera is the one you have on you at the time” [and] the device most people have on them today is a phone,” says Atkins. “We wanted to create a premium camera centric smartphone that was differentiated by the product design and a combination of hardware and software specifically designed to give a premium camera experience.”

The phone has so far received mixed reviews – though it has had a more positive response than the IM5. Engadget reported taking photos that were ‘fine, but unremarkable‘. The Verge claimed the camera was ‘slow to focus and slow to process‘ but added that the phone “certainly has some appeal.” 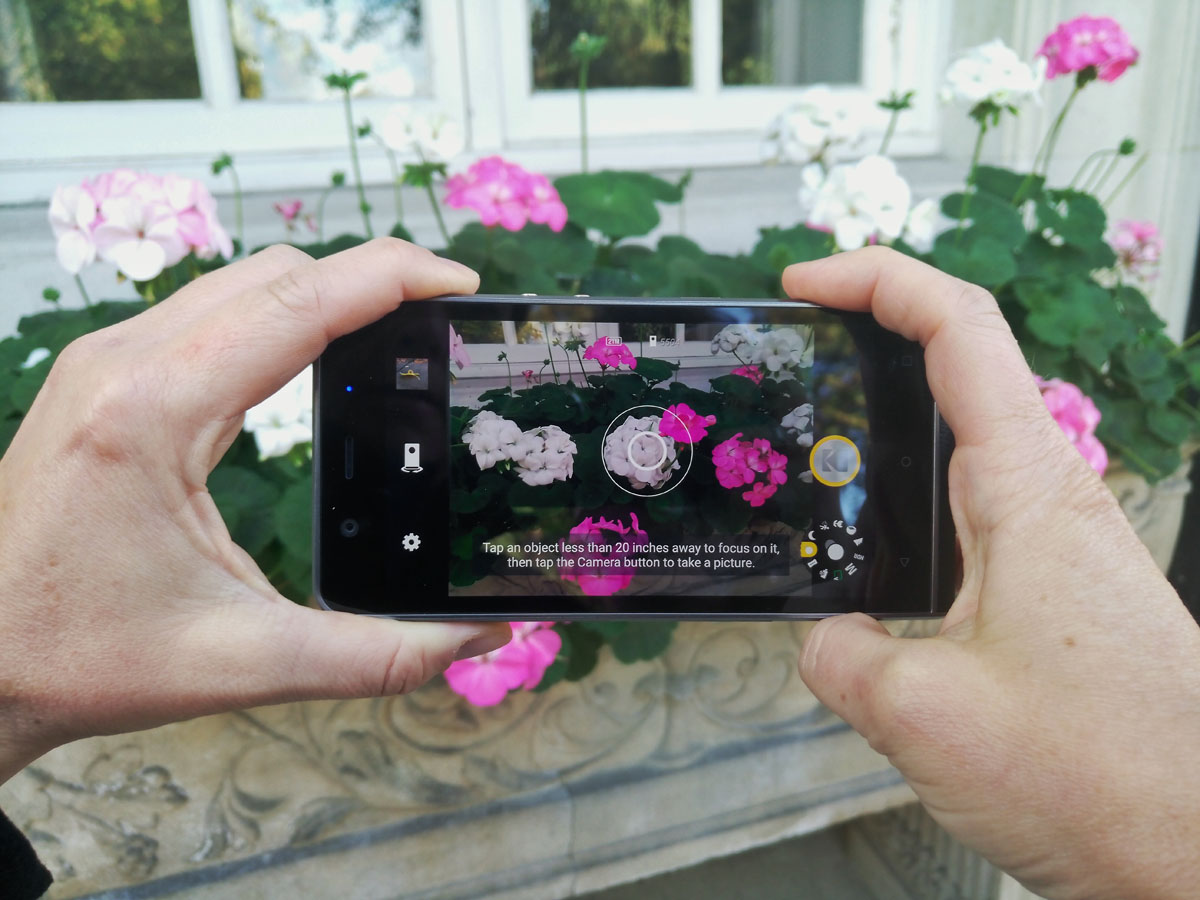 The Ektra camera in bokeh mode, which captures two images with different focus points, simulating the blur of a wide aperture lens 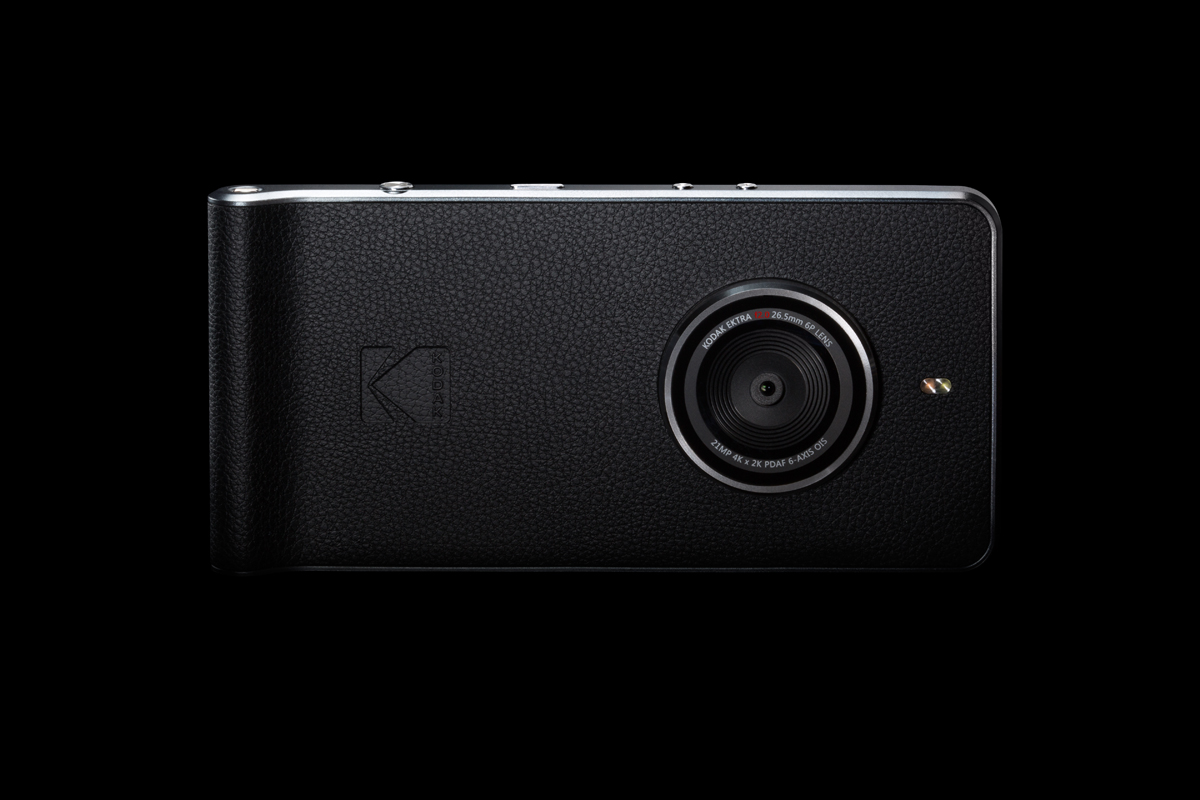 Launching a smartphone is a riskier move than re-inventing a classic product like the Super 8 – particularly when most smartphones have equally good or better cameras and have launched global marketing campaigns highlighting their ability to take great pictures. With its retro design and printing service, Kodak has created a new phone with an old-school appeal, and its design certainly stands out among sleeker, more contemporary models – but does anyone actually want a phone that looks like a camera?

The product’s success remains to be seen (the brand is launching the phone in Europe in the run-up to Christmas and in other markets in 2017), but with the launch of Ektra, the Super 8 and its new logo, Kodak has set out a clear strategy for the future.
Atkins says the brand plans to launch several new products in the next six months and will be rolling out a new campaign ahead of the Ektra’s launch with street art collective Global Street Art. 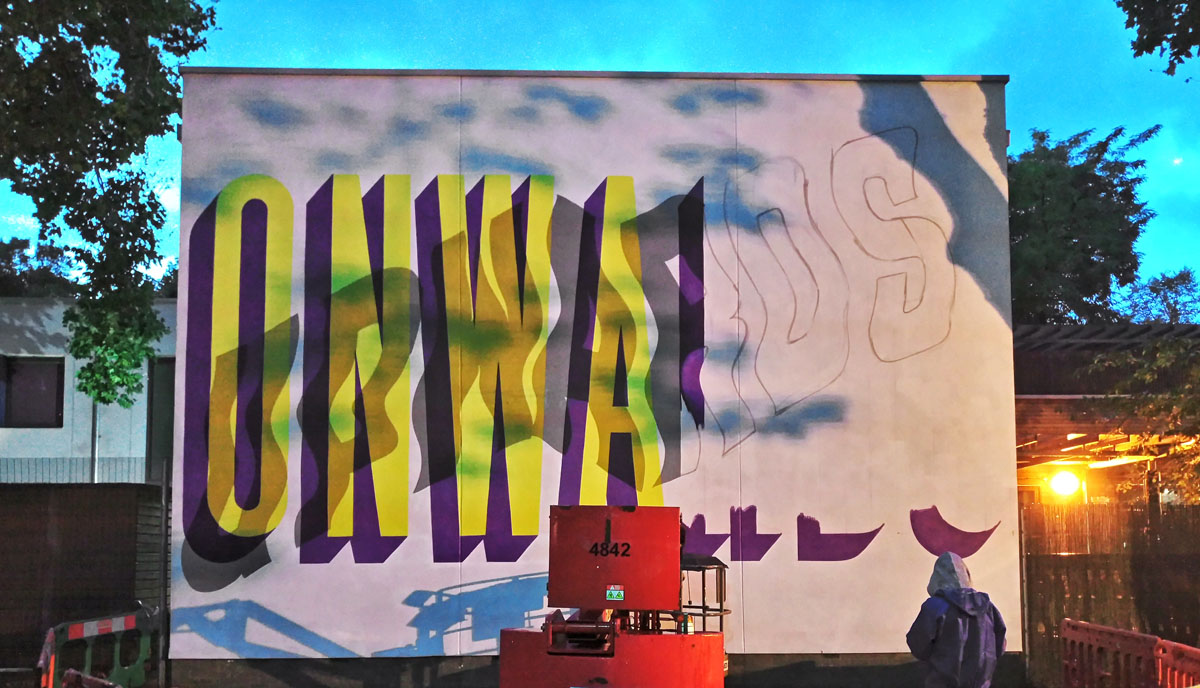 Still from a new campaign promoting the launch of the Ektra

“A plethora of artists from the global street art creative community, led by legendary street artist Gary Stranger, will be creating wall murals around London and capturing their unique artistry with the phone…. The murals will be further enhanced and shared on social networks using the editing software Snapseed and multiple social apps,” she says.

Analogue remains a core part of the brand’s product development plans – “We make film and a big portion of the business is print-focused,” says Atkins – but the overall aim is to bring back the image of Kodak as an innovative brand making creative tools for the masses, this time by combining digital and analogue technology.
Like Co-op before it – and NatWest – Kodak has looked to the past to evoke a sense of nostalgia, bringing back a fondly remembered and widely recognized brand mark (Kodak says 58% of people recognized the brand from the outline of the ‘K’ alone in initial research, demonstrating the strength of Oestreich’s 1971 design). At Kodak, however, this strategy is driving not just its branding, but also its product development.

“We have been a part of pretty much every major imaging innovation over the past 128 years. Like many companies that get big in an increasingly agile business environment Kodak has had its challenges. But we have a brand people love. And that’s where we are focused right now,” says Atkins.

“It’s a major part of why we brought back the famous K logo. We have gone back to what we do best, we make products that enable creativity and we are celebrating our heritage whilst looking very much forward to the future. The exciting thing for me is as head of the brand I get to drive not only the visual identity of the brand but also consumer product design which means our brand vision and strategy can be woven into both brand experiences and product experiences.”