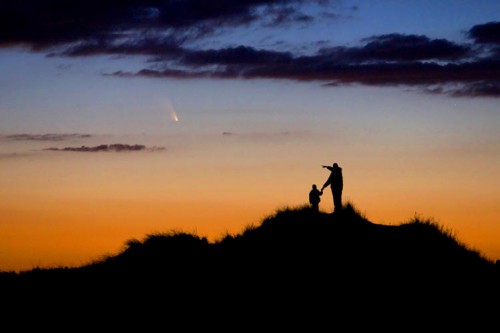 The 2014 Astronomy Photographer of the Year competition has just released its cosmically awesome shortlisted entries. Capturing scenes across the solar system, galaxy, and beyond, the images are spectacular reminders that we’re all living on a “mote of dust suspended in a sunbeam,” as astronomer Carl Sagan famously put it in “Pale Blue Dot.”
These images were chosen from more than 2,500 entries to the sixth annual competition, run by the Royal Observatory Greenwich in association with BBC Sky at Night Magazine. Some photographers aim their lenses close to home: one snapped the aurora borealis dancing above the clouds from the window of a transatlantic flight between London and New York. Others peer 1,350 light years away, where new stars are born in the stellar nursery of the Orion Nebula, visible to the naked eye on a dark, moonless night.  Above, a father and his young son watch the evening display of Comet PanSTARRS on First Encounter Beach, Eastham, Massachusetts, USA. The photographer had spent weeks preparing the shoot to capture the comet, which will not be seen again for over 100,000 years, in order to foster his son’s interest in astronomy. Then there’s stunning imagery of the Milky Way reflected in the Snake River at Wyoming’s Grand Teton National Park; a solar eclipse gleaming through the steam of Old Faithful Geyser at Yellowstone; and Jupiter, captured moments before aligning with the body of the moon.

The winners of the competition’s four categories–Earth and Space, Our Solar System, Deep Space, and Young Astronomy Photographer of the year–will be announced on September 17. An exhibition of the winners will open the following day at the Royal Observatory. All the entries to the contest were submitted via the Astro Photo Flickr group and can be seen here. 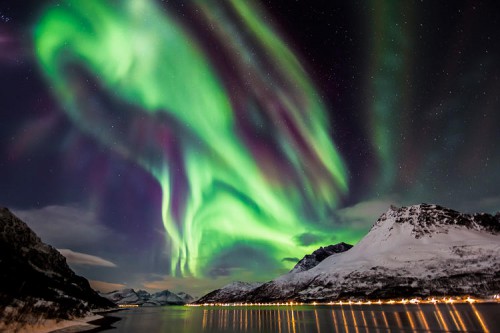 The spectacular Northern Lights unfold over a fjord, in Skjervøy, Troms, Norway. The vibrant colors are produced at various altitudes by different atmospheric gases, with blue light emitted by nitrogen and green by oxygen. Red light can be produced by both gases, while purples, pinks and yellows occur where the various colors mix and intersect. A bright meteor streaks across the magnificent night sky over the smoke-spewing Mount Bromo just one day before the peak of the Eta Aquarid meteor shower, which is caused by Halley’s Comet. Mount Bromo is one of the most well-known active volcanoes in East Java, Indonesia. 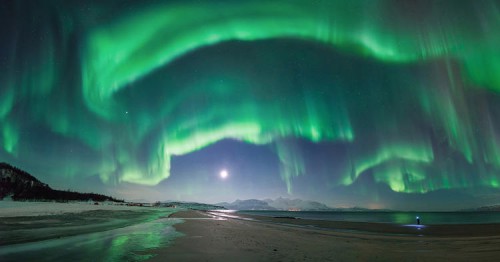 A flare up of the aurora over Steinsvik beach, in Nordreisa, Troms, Norway. It lasted no more than 10 minutes from start to finish but it lit up the entire sky and took the photographer by surprise, just as he was about to leave the shoot. The figure on the right is his brother, furiously searching for his lens cap to capture the same phenomena. Jupiter, Venus and Mercury align against the staggering colors of the sunset and flora of the African savannah in June 2013. The bare tree and the human figure both point to one direction: Jupiter. 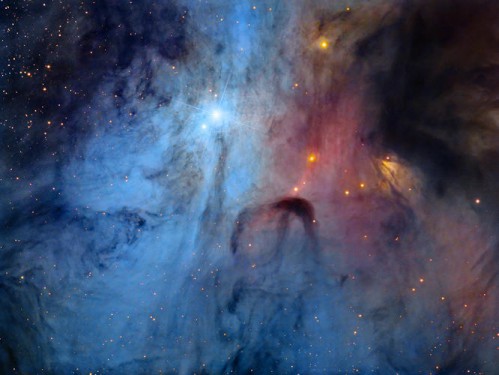 The rarely imaged core of the multiple star system, Rho Ophiuchi. A deep exposure showcases the whirling clouds, in an area the human eye would struggle to see much detail, even with the use of a telescope. The stellar nursery of the Orion Nebula, 1350 light years away captured by 15-year-old Gray Olson. As one of the brightest nebulae, it's visible to the naked eye in the night sky making it a popular target for amateur astronomers. 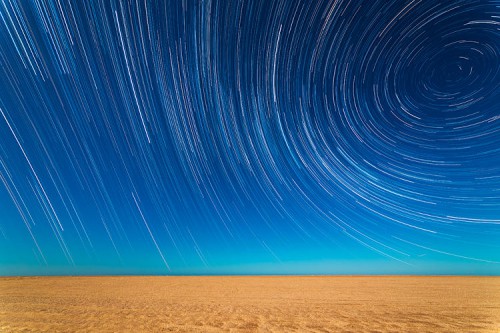 Multiple shots are compiled to create a time-lapse effect, as the Earth’s rotation draws the light from the stars into long trails arcing over the beach in Mar de Ajo, Buenos Aires Province, Argentina. 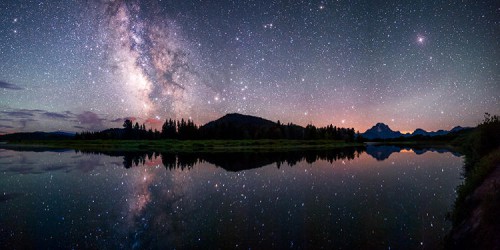 The Milky Way reflected in the Snake River at the famous Oxbow Bend in Grand Teton National Park. 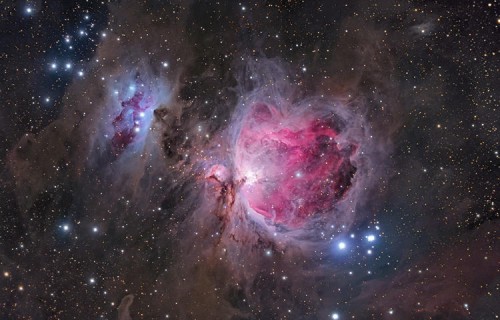 In this view of M42, more commonly known as the Orion Nebula, the photographer has emphasized the delicate veils of dust surrounding the more familiar gleaming heart of the nebula. The image highlights the structure of the object, giving a sense of vast cavities filled with pink hydrogen gas and the blue haze of reflected starlight. A daytime view of an astronomical alignment, captured from the photographer’s backyard in Buenos Aires. The image shows the moments just before the planet Jupiter is blocked from view by the Moon. The planet can be seen as a pale dot to the right of the Moon’s body. 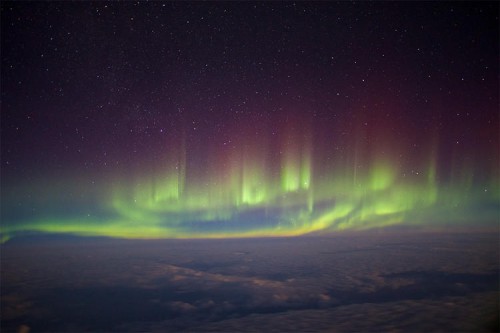 Aurora seen from the window of a transatlantic flight between London and New York in February 2014. The photographer balanced his camera on his backpack to capture the greatest natural light show on earth from a rare perspective. 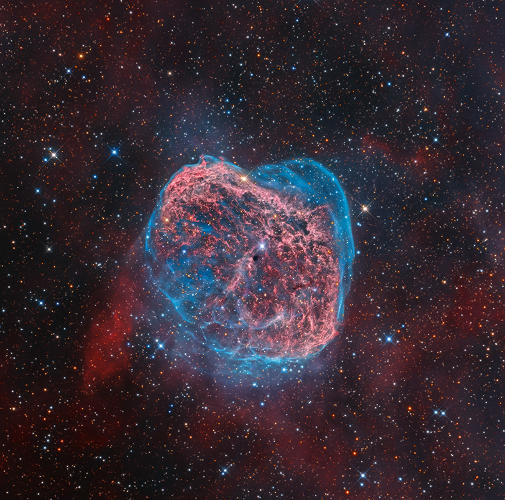 This colorful starscape, taken from Rancho Hidalgo, New Mexico, reveals the heat of the Crescent Nebula in a whirl of red and blue. The emission nebula is a colossal shell of material ejected from a powerful but short-lived Wolf-Rayet star (WR 136), seen close to the image centre. Ultraviolet radiation and stellar wind now heats the swelling cloud, causing it to glow. The Geminid meteor shower races over the Flatirons of Boulder, Colorado, in December 2012. A fragment burns bright enough to outshine all of the planets, producing what's called a Fireball. Orion can also be seen in the photograph trailing across the sky toward the Pleiades and the glow of Jupiter inside the constellation of Taurus. 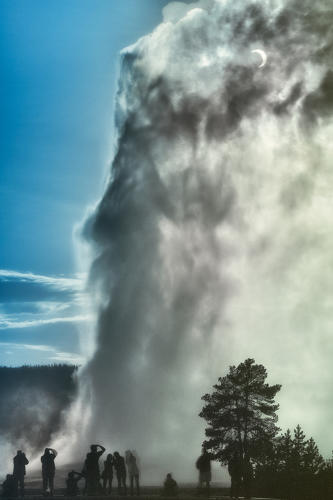 On October 30th, a CME (Coronal Mass Ejection) hit Earth, displaying multi-colored auroras across the sky for most of the night in Kattfjordeidet, Tromsø, Norway. The old birch trees resemble arms reaching for the auroral corona appearing like a strange creature in the sky. 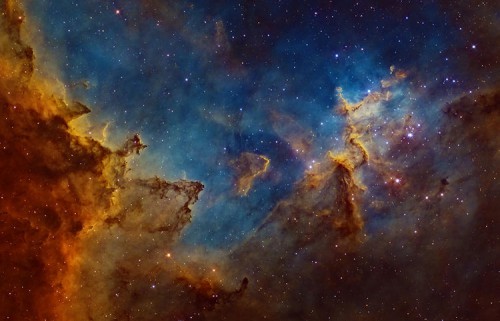 Situated 7500 light years away in the ‘W’-shaped constellation of Cassiopeia, the Heart Nebula is a vast region of glowing gas, energized by a cluster of young stars at its center. The image depicts the central region, where dust clouds are being eroded and molded into rugged shapes by the searing cosmic radiation. This image was taken while exploring a 1300m lava cave in Iceland. In some areas the roof has caved in, so snow piles up in the winter time and creates these snow peaks. The aurora at its peak gleams through the roof of the cave and despite only taking up a small portion of the photo, it remains the focal point. 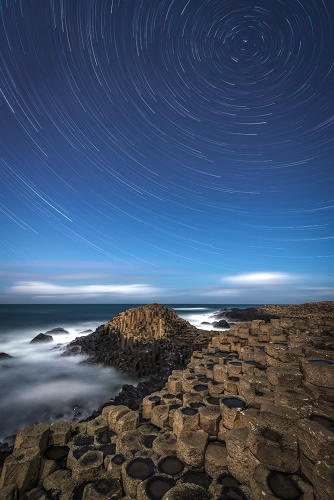 A composition of several images showing how our planet’s rotation draws the stars out into circles. Separated from the sky by the stark line of the horizon, the atomic symmetries of crystallized rock turn into hexagonal columns at the Giant’s Causeway in Northern Ireland.

PrevPreviousa fish story you haven't heard before
Nextan organic skyscraperNext
Get the best information from our knowledgeable, experienced staff to support you and your team. click here