the importance of packaging and branding 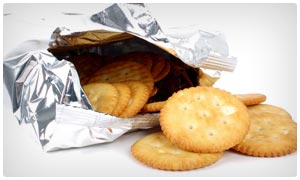 While most people know that you shouldn’t judge a book by its cover, few bring this adage to the grocery store. Here, decisions are often made on the basis of appearance alone — at least if you trust a new study from the University of Miami School of Law, where researchers have determined that packaging and other visual cues can have a tremendous impact on consumer choices.
In a domestic market saturated with branding and advertisement, the every-day shopping environment has come to rely heavily on visual input. A quick glance down the aisles of your local corner store suggests that noticeability is, for better or worse, the name of the game for most companies. The current study, which is published in the journal Proceedings for the National Academy of Sciences, sought to investigate how consumers actually interact with this onslaught of visual information.
Senior research scientist and co-author Milica Mormann said in a press release that, when products compete on the shelves, the consumer’s eyes must sometimes complement her mind. “When choice options are presented simultaneously, eye movements are considered a good predictor of our economic decisions,” she said. “The big idea here is that perceptual processes happen in the brain in parallel with economic value computations and thus influence how economic decisions are made.”
For the study, the authors enrolled a number of people participants in an experiment with a simulated choice environment. Subjects were presented with four snack options and asked to choose one of them. While they decided, the team used eye-tracking technology to monitor their visual interaction with each product.
Using the eye-movement pattern of each subject, the researchers were able to run so-called neuro-computational simulations and determine the relative visual attractiveness (“saliency”) of each product. They found that, when it came to choosing what snack to eat, the saliency of each product influenced the subject’s decision almost as much as their initial preference. In other words, each decision was part preference, part visual attraction.
The interesting part, however, is that the data helped the researchers predict what snack the subjects would pick. It turned out that a decision making model based on a saliency-to-preference ratio of about 1:3 to 2:3 was far more successful than a model based on either quality alone. “These findings can be applied to guide the design of choice environments, to ‘nudge’ people toward making optimal choices, be it selecting a healthy food option to eat or the best retirement plan to invest in,” Mormann told reporters.

the psychology of shopping

The current study is the latest in a growing series of inquiries into the psychology of shopping. Numerous reports and articles point to the precise and often unsettling schemes employed by advertisers and store managers to drive sales. It would appear that, in 2010s supermarkets, every feature is designed to make even the thriftiest consumer splurge on stuff they really don’t need.
Why, then, do we let the grocer’s stratagems fools us every time we shop? According to experts, several psychological mechanisms may account for the strange malleability our mind assumes in these environments. One theory suggests that our rational eye simply snaps shut after about half an hour of high-octane brand and advertising exposure.
“We know from previous research that the brain behaves illogically when faced with the sort of information overload that shoppers are faced with in a typical supermarket,” Philip Adcock, managing director of the consumer research service Shopping Behavior Explained, told BBC.  “It has shown us that nearly 20% of shoppers are likely to put special offers in their basket even if they are more expensive than the normal product, and we know that nearly half of shoppers ignore buy-one-get-one-free items and only choose one.”
That said, it is not yet clear whether these research efforts will help consumers avoid mind tricks or allow retailers to devise new ones.

PrevPreviousa delicious land
Nextmainstream mammaNext
Get the best information from our knowledgeable, experienced staff to support you and your team. click here