Hundreds of local homeless Boise residents receive warmth from the idea of one thoughtful woman and her rallying company and community. 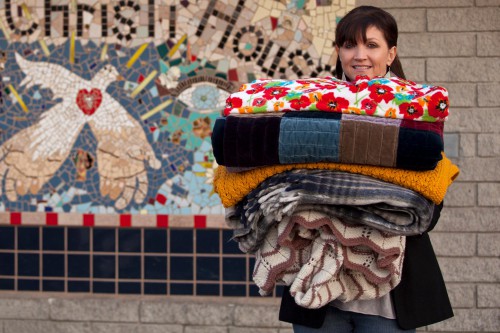 Anyone who has ever had or been a child understands the significance of blankets. My toddler daughter says a longer, more tender goodbye to her blanket than she says to her father or to me.
Three years ago, Laura Herrick, an account director with Foerstel Design, worked with her company to create the Boise Blanket Drive after recognizing the transformative power of blankets to help the homeless.
Foerstel Design is located near 16th and Main Street, near the hub of Boise’s homeless care facilities. One autumn night in 2009, Herrick and a colleague were working late. When they left the office they were struck both by the sight of so many homeless people overflowing from the shelters and also by the thought that for most of the year in Boise, these people are out in the cold. Herrick knew that Boise has a generous number of food and coat drives, and it occurred to her that these people could probably use blankets.
“A good blanket can keep a family warm all night,” Herrick says. Both she and her colleague had unused blankets at home, and so they brought some back the next day.
The response was overwhelming. The homeless shelter invited Herrick to their annual memorial service, always held the day before Thanksgiving.
“It was such a touching ceremony,” Herrick says. “It is an outdoor vigil with candles and a bonfire. The shelter provides a big dinner for the homeless that night. The ceremony honors the homeless who have died during the year, telling personal stories about the value of those people’s lives.”
The ceremony includes an assortment of religious rituals, in hope of speaking to as many people of different faiths as possible. A local bagpipe player volunteers the music. And this year, for the third year in a row, the ceremony will include the gift of blankets.
Now every year Foerstel Design creates posters for the Blanket Drive, places them around town, and offers their office as a receiving place for donated blankets. The Blanket Drive has had a generous turnout of givers in its first two years, which goes to demonstrate one of the many wonderful things about Boise: if you give people here an avenue for helping others, they will use it. And many people have extra, unused blankets in their houses.
To participate, bring a clean blanket in good condition to Foerstel Design (located at 249 S 16th St, Boise, ID 83702) during the two weeks before Thanksgiving. Blankets do not have to be new.
Baby blankets are welcome, too. Roughly one-sixth of the homeless population is made up of children, from babies to pre-teens. One year someone brought a stack of Disney blankets, and the homeless children were over-the-moon excited.
There are a thousand worthy ways to donate to the community: you can give time, give blood, give money, give toys, give clothes. In giving blankets, the people at Foerstel Design have found a way to give that helps the homeless keep warm in more ways than one.
“A coat is functional,” Herrick says, “but a blanket is personal.”

PrevPreviouslet's not forget to be thankful for the earth
Nextoprah's organics to hit the shelvesNext
Get the best information from our knowledgeable, experienced staff to support you and your team. click here