is shopping for groceries from your phone next? 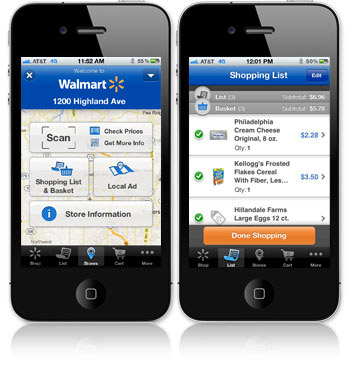 Smartphones can do plenty of things. Now retailers are going to put them to work for them. Pretty soon, having an iPhone could change the way we buy our groceries.
The retail has recently joined forces with Apple to create an app that is supposedly now being tested in the company’s hometown of Rogers, Ark., by Walmart employees who already own iPhones, according to a form seen on Survey Monkey’s website, Reuters reports. In theory, this app would allow consumers to scan goods onto their iPhones and pay for them in a self checkout line.

A recent study by NCR surveying 400 grocery stores across the U.S. reports that 70% of shoppers would like to see self-checkout expanded to mass merchants, drug stores and more. With such a strong percentage looking forward to advancements in self-checkout, it’s no surprise Walmart is developing a mobile solution.

Walmart already offers a mobile app (at right) that can scan barcodes and check prices, along with a shopping list and basket, so self-checkouts are a natural extension as the mobile wallet business takes off, along with its@WalmartLabs R&D team exploring social and mobile commerce products and digital innovations such as semantic search.
The retailer promised earlier this year that it would put in more self checkout lanes into its stores as well as Sam’s Clubs, the wire service notes. If the test works out, the app will likely expand beyond Apple devices to Android and other mobile platforms. Apple’s former retail chief is also bringing mobile self-checkouts to his new employer, JCPenney.
The hope, on Walmart’s part, is for consumers to do a little more of the checking out on their own, which means, of course, the company could lose a few employees and save a lot of cash. In March, Walmart CFO, Charles Holley was quoted as saying, “For every 1 second in average transaction time at the Walmart U.S. chain, the company has said that it spends about $12 million in cashier wages,”.
Although they haven’t admitted to testing such an app, Walmart spokesman David Tovar recently said, “We’re continually testing new and innovative ways to serve customers and enhance the shopping experience in our stores,”.
Would giving shoppers the ability to scan products throughout the store and then pay for them through a modified self-checkout app be a strong improvement in Walmart’s customer service? Is more people staring at phones better for shopping than a strong staff of friendly and knowledgable customer service employees? The same NCR studied we mentioned earlier found that 64% of self-checkout shoppers said they “agree” or “strongly agree” with the statement “I believe retailers who offer SCO provide better customer service.”
How often do you use self-checkout when grocery shopping?  Allowing shoppers to scan all their products with their phone and then pay for them in a self-checkout line seems like it would save time, but could also possibly result in just another congested self-checkout line. What do you think?

PrevPrevioustest your typography skills with typometry eye chart
Nexthipster brandingNext
Get the best information from our knowledgeable, experienced staff to support you and your team. click here