The misuse of the word “logo” is one of those things that gets many design-minded people practically purple-faced with anger (a sibling to debate over “fonts” v. “typefaces”). A logo, they say, is not the same as a symbol, which in turn is not the same as a combination mark. 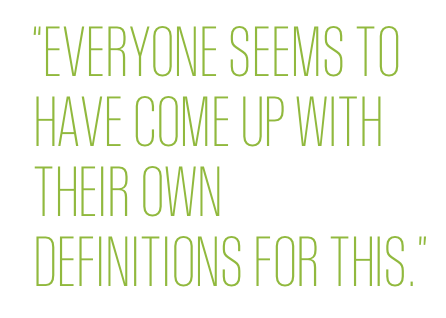 So what’s the difference? In brief: A logo is a word, a symbol is a picture, and a combination mark is a PB&J mashing up the two. But really, in most circumstances, using “logo” for everything is just fine, say Pentagram’s Michael Bierut and Ammunition Group‘s Brett Wickens. Just don’t expect the pedants to like it.

Although most people call any emblem that has been designed to visually represent a brand a logo, “logo” is usually taken to be short for “logotype,” which literally means “word imprint” in Greek. This is why we sometimes call logotypes “wordmarks.” According to this line of thinking, the only true logos are the ones that contain nothing but stylized letters, representing the literal name of a company. In its curlicue cursive, the distinctive Coca-Cola emblem is a logo. So is Paul Rand’s Venetian Blind IBM wordmark . Other logos include CNN, Sony, Samsung, Ray-Ban, Dell, NASA, Fed-Ex, and even Fast Company. Basically, if you see something in a company’s emblem that can’t be read, it’s not strictly a logo. Or, at least, a logotype.

But logotypes have issues in a global economy. Because they depend upon being read, logotypes for American companies might be confusing to people who live in countries that don’t use the Latin alphabet. Sometimes, companies will modify their logotypes for different markets accordingly: Coca-Cola, for example, maintains a stylistically consistent logotype in many different alphabets. These days, though, many companies prefer to take a more abstract approach, creating a universal symbol that abstractly represents their brand. Apple’s iconic fruit is such a symbol, as is Airbnb’s new sexual Rorschach test of an symbol. Other examples of symbols include the Red Cross and Red Crescent emblems, the Shell gas station symbol, the Nike swoosh, and more.

Finally, there’s the combination mark. These are emblems that use a combination of both words and symbols to represent a company or organization. McDonald’s, Domino’s Pizza, Starbucks, TiVo, AT&T: all these companies use combination marks. Some companies use both logotypes and symbols, depending on the context. Nike, for example, has both a logotype and a symbol, which can be used to represent the company in different scenarios. The Nike swoosh by itself might work on the side of a sneaker, whereas a combination of the swoosh and the Nike logotype might look better on company letterhead, for example.

do the distinctions matter?

Over the years, we here at Co.Design have had plenty of commenters criticize us for using logo as a catchall term. But really, the distinction is pedantic.
A symbol may not be the same thing as a logotype, but abbreviating both logotypes and logomarks as “logos” is totally logical, because both types of logo are meant to do the same thing. In fact, symbols are often referred to logomarks for just this reason. The distinction between a symbol and a logomark might be useful to designers, who may want to pin down what type of logo a client is looking for, or experts who are discussing the distinction between logotypes and symbols academically. But 999 times out of 1,000, just saying “logo” is fine. 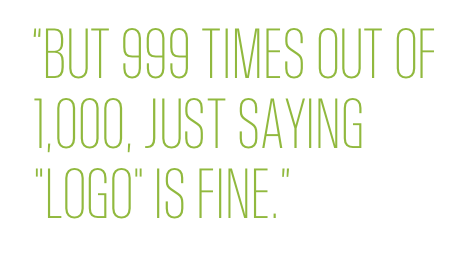 “I don’t think the distinction is that important,” Brett Wickens, partner and identity specialist at Ammunition Group told me. “Almost everyone refers to the emblematic visualization of a brand as a “logo,” even though it might be a symbol, a stylized word, or a combination of both. For a designer, what really matters is deciding what’s most useful, and what’s likely to convey the right attitude and distinction for the brand.”

Pentagram partner Michael Bierut agrees. “Everyone seems to have come up with their own definitions for this,” he says. “The distinction only matters when you’re in a situation where you need to refer to these overall identity elements precisely.”

Don’t expect the people who want to distinguish between logos and symbols to go away, though. Wickens says that while “logo” is a perfectly fine catchall term for an emblematic visualization of a brand, new techniques in identity design are creating even more kinds of logos (and more names!), such as responsive logos that change depending upon the ways they are used.
“With emblems that change based on circumstance, we see new terms like ‘fluid’ or ‘dynamic identity’ starting to emerge, and I’m sure a whole new lexicon will spring up around that,” he says. There’s a new world of logo design right around the corner to be pedantic about!