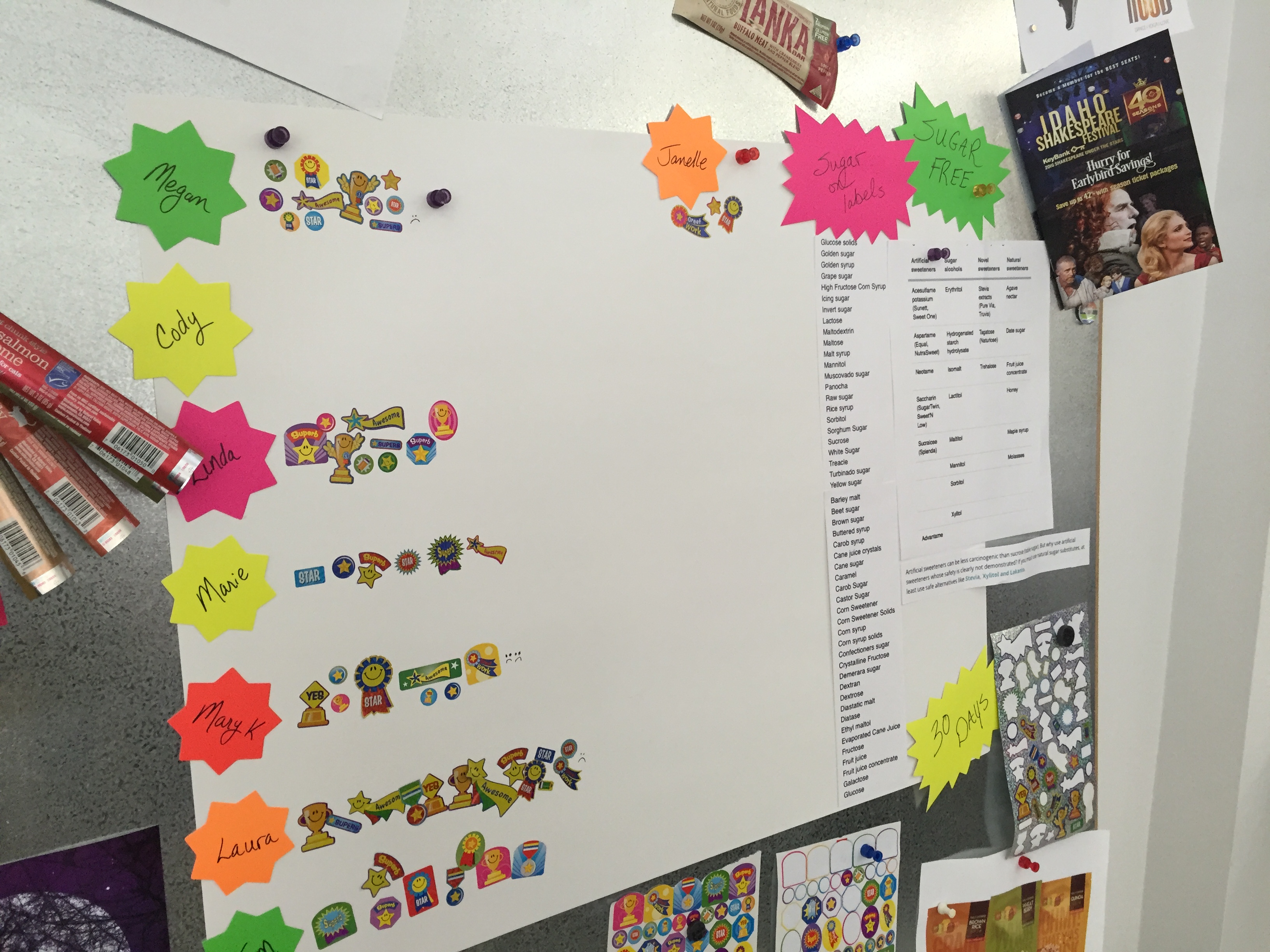 After a few weeks of checking labels for any added sugar, here’s a little mid-month update on those of us at Foerstel who are participating in the office-wide No Added Sugar January.
LINDA:
First, I don’t eat much processed food to start with but this has really made me have to think about every single thing I eat. Processed sugar is hidden almost everywhere. For example, I needed to grab something on the run to take to a meeting the other night. I specifically hit the Whole Foods salad bar because I felt I could keep a handle on it. Without even giving it a second thought, I threw some Beyond Meat chicken strips on my otherwise all veggie salad (with only olive oil for dressing). Later on, I found out those meatless chicken strips had sugar in them, so no smily face on the board for me that day.
But unlike other “diets” or challenges I’ve done, I feel like this one is really much more adoptable as a lifestyle. Maybe not as strict as we’re doing right now – I would like to have a frosted sugar cookie again sometime in my life – but as a day to day way of living with sugar very occasionally when it comes to something special (read: State & Lemp dessert).
I love the articles that Laura has shared with us. The most mind blowing one was the amount of sugar in some restaurant food. I also think all the time about how 4g of sugar is the equivalent of a teaspoon.
And finally, it would have been really easy to turn to fruit to satiate my sweet tooth but even though it’s natural sugar, I am keeping a watchful eye on that too. I’ve been using MyFitnessPal to calculate the sugar each day and striving to keep it (well) under 45g.
An added bonus? I’ve lost 2.5 pounds.
LAURA:
After watching a couple of sugar documentaries, I learned what sugar and what sugar-substitutes do to your body. I never considered myself an unhealthy eater until I watched them…then I was so glad that we are trying this challenge, especially since I wouldn’t have to go through it alone.

MEGAN:
Let’s just say I drink a lot of Diet Coke and eat a lot of candy, I just had my second root canal and I’m under 35. So, while this challenge on paper seemed extremely difficult for me to tackle, it had to be done. In anticipation, I received a SodaStream for Christmas to curb bubbly Diet Coke cravings and stocked up on caffeinated tea at the house.
I’m from the south and often crave egg salad, tuna salad, BLTs, fried egg sandwiches — basically anything with mayonnaise. So, I found Duke’s brand (also from the south) is one of the few mayos that doesn’t contain any added sugar, so I kindly asked my mom to ship me some from North Carolina.
Other than my alternative staples, I wasn’t that prepared food-wise at home. So, when I went out shopping I carefully checked labels, Googled funky words and referenced a list of alternative sweeteners. This is something that I’ve never done before, but by doing so my shopping became a lot more intentional. No more impulse candy buys, no more spending money on chemical poison (aka aspertame), instead becoming mindful of what I consume and realizing that just because I don’t eat a lot of processed foods, it doesn’t mean I’m eating the best alternative, either.
I don’t know if I’ve lost or gained weight, but I do know after about a week-long headache (see aspertame reference, above), I don’t crave Diet Coke, I am not eating candy by the bag and I don’t crave something sweet after each meal. However, I am eating more often about every 4 hours — squeezing in an orange, some berries, nuts or an apple between meals. I am also asking more questions of restaurant food providers and refraining from dipping my (occasional) fries in a vat of ketchup. So far, so good.