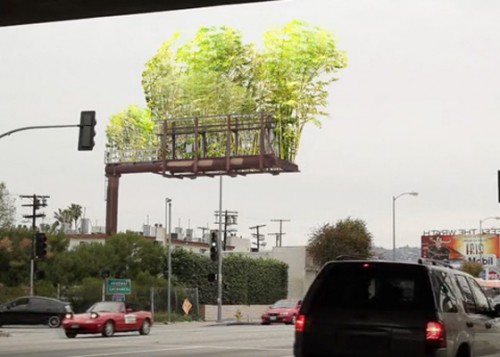 Urban Air: Los Angeles Artist Transforms Billboards Into Floating Gardens – Liz Dwyer
Imagine sitting in traffic during your daily commute and instead of seeing the clutter of countless billboard advertisements you see gardens floating in the sky. That’s the kind of green experience Los Angeles-based artist Stephen Glassman wants us to have as we travel through our urban landscape. His Urban Air project hopes to transform the steel and wood frames that hold billboard advertising into suspended bamboo gardens.
Glassman’s been creating large-scale bamboo installations across Los Angeles since the aftermath of the 1992 Los Angeles Riots. He came up with Urban Air because—like many of us who live in congested cities—he saw a need for more fresh, green space, and a greater connection to humanity. The idea won the 2011 London International Creativity Award and proved so inspiring that Summit Media, a billboard company based in Los Angeles, actually offered to donate billboards along major streets and freeways. 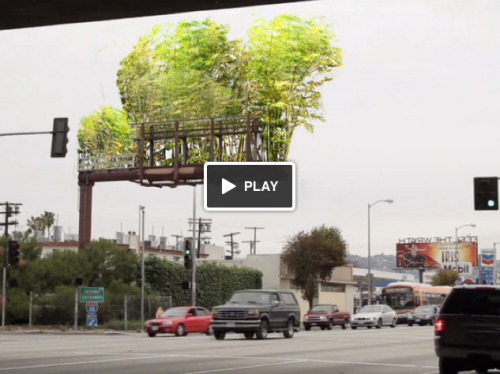 Click here to view the Kickstarter video about Urban Air

As you can see in the video above, to create the garden billboards, Glassman and his team simply remove the commercial facade and modify the existing structure by installing planters, filling them with live bamboo, hooking up a water misting system and connecting them to a wifi network that monitors the environment. Then, says Glassman, “when people are stuck in traffic” on the 10 Freeway instead of seeing advertisements, they “look up and they see an open space of fresh air.” 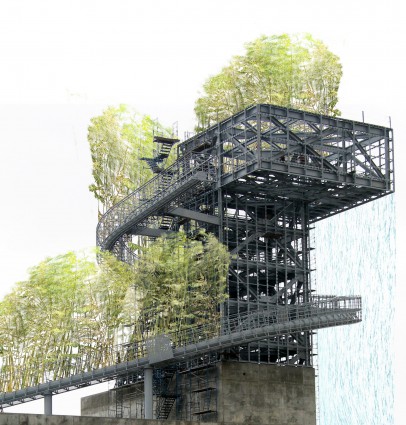 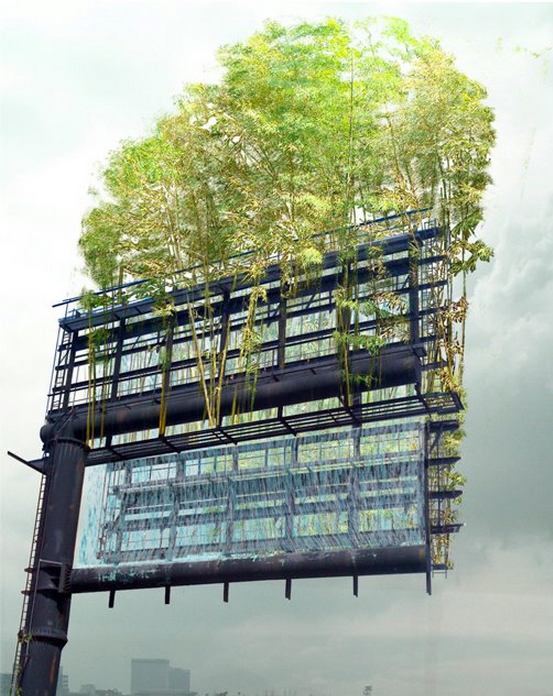 The project’s hoping to raise $100,000 through Kickstarter to structurally retrofit the first prototype billboard, secure licenses, permits, and insurance, and pay for cranes to help install everything. They hope to spread the idea across the globe so they’re also producing “a system ‘kit’ that enables any standard billboard to be easily transformed to a green, linked, urban forest.” While it can be argued that it seems like a hefty sum for just one billboard and a toolkit, seeing a beautiful garden suspended in air sure beats having to look at another advertisement, right?

PrevPreviousrecycled skateboard sunglasses
Nexttop shelf at whole foods, boiseNext
Get the best information from our knowledgeable, experienced staff to support you and your team. click here