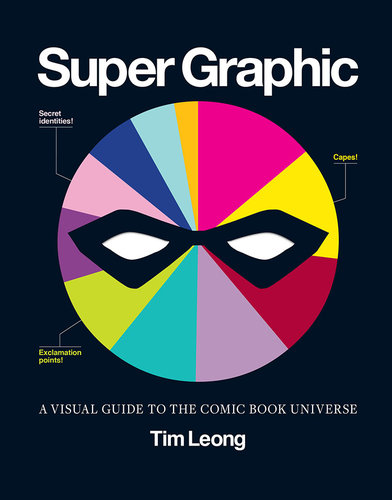 When you think about it, Batman has slugged an awful lot of guys throughout the last few decades. Likewise, over the years, Superman has confronted an entire rainbow’s worth of different flavors of Kryptonite, Spider-Man has slung entire oil tankers worth of liquid webbing, Robert Crumb has drawn a continent’s worth of amply bottomed girls, and Scrooge McDuck has amassed a fortune of one multiplujillion, nine obsquatumatillion, six hundred twenty-three dollars and sixty-two cents. Really. And that’s all just to start.
Past the escapist adventures and four-color funnies, comics are just a huge public record of data. Data about imaginary characters who might wear their underwear on the outside, true, but data nonetheless: data about how many Batarangs Batman has thrown, what kind of pizzas the Teenage Mutant Ninja Turtles have eaten, the most common curses that supervillains utter at the moment of defeat, and how many times Charlie Brown has had that football yanked away from him and broken his skull as a result. 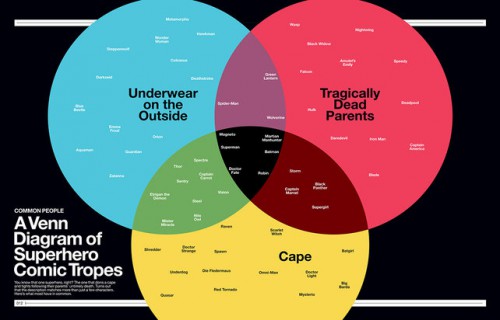 Most comic book characters, according to Leong, can be defined by whether or not they have tragically dead parents, a cape, or wear their underwear on the outside. 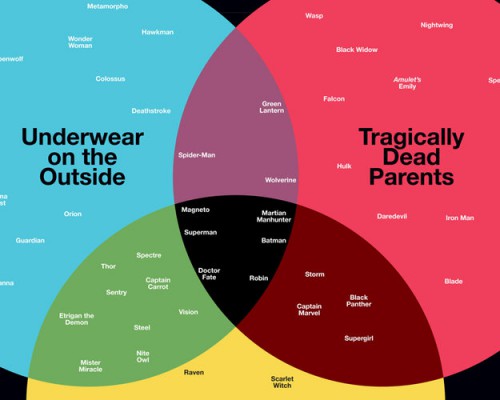 A sizable number of superheroes have all three!

Obviously, the richness, depth, and inherent silliness of this incredible data set make it prime fodder for the art of the infographic. Super Graphic: A Visual Guide to the Comic Book Universe is a new book dedicated to just that very thing, visualizing the intertwining, multi-paralleled cosmos of the comic book in a way that even a layman can enjoy. Written by Tim Leong, it’s a treasure trove to the comic book fan and data junkie alike.
Flipping through Super Graphic, it would be easy to dismiss it as a book by a comic book nerd, exclusively for comic book nerds. You’d be half right. Leong is a lifelong comic fan, who once ran a website (then magazine) called Comic Foundry. But this isn’t a book exclusively for comics fans. In fact, Super Graphic is a book that Leong hopes will appeal to everyone. “A big tenet of Comics Foundry was that there’s something in comics for everyone,” Leong tells Co.Design. “So while I wanted hardcore, lifelong fans to enjoy Super Graphic, I also wanted to teach people about comics who might otherwise never have read them.”
Even with just a cursory flip through Super Graphic’s 197 pages, it’s hard to imagine that anyone could fail to find a chart in the book that they loved. It’s not just superheroes: Leong’s visualizations deal with everything from Marvel vs. DC to comic strips and the indies, and the charts range from the entertaining to the instructional, from the subjective to the laboriously data driven.
For example, in one of his favorite charts, Leong sets out to explore the ways in which every single character in the Batman-verse relates to one another, a kind of Bat-family tree that spans 75 years. “It turns out that Batman knows a lot of people,” laughs Leong. In another chart, Leong breaks down every animal-inspired superhero or villain based upon the biological kingdom, phylum, and class. “That one was really difficult because there’s not just some database you can search of all the characters and what animals they are based on. There was tons of research.”
Other charts are more personal statements about how Leong himself views comics. For example, a low-res illustration of Superman turns out to be a chart comparing the various Superman films, with each pixel corresponding to how much he enjoyed each individual movie. Another chart attempts to map the various characters of indie comic legend Robert Crumb to the relative size of their posteriors according to four criteria: bigness, tightness, jiggliness, or smallness. And “A Calvin and Hobbes Trajectory” maps out the arc of urine you see on those horrible ‘Calvin Peeing’ decals and mud flaps, and then charts it against the arc of Leong’s own plummeting “faith in humanity” every time he sees one. 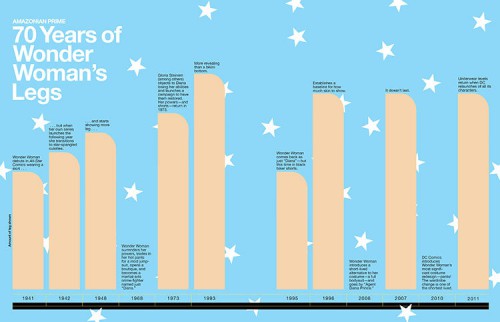 Here’s a saucy one: How has Wonder Woman’s hemline changed over the years? 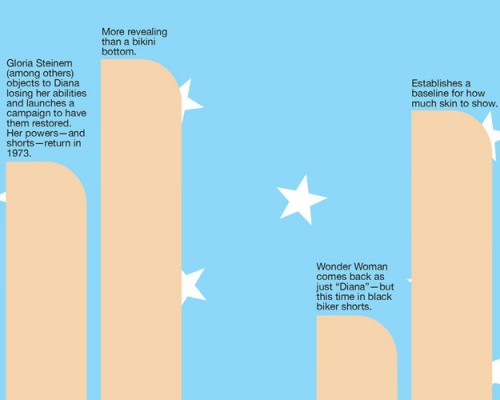 Wonder Woman has never gone all the way down to her skivvies, but she’s come close!

In Super Graphic, there’s a chart that compares Marvel’s real-life baseball team to Charlie Brown’s baseball team, right down to their record (it’s a shutout: Marvel wins). There’s a visualization of every nickname Stan “The Man” Lee ever gave to anyone in the Marvel bullpen. There’s a line graph comparing the net worth of Bruce Wayne, Richie Rich, Uncle Scrooge, and other comic book billionaires. There is a chart showing the evolution of Superman’s emblem, which has changed shape way more than you’d possibly think. There’s a Venn Diagram of Superhero Comic Tropes, showing which characters have dead parents, wear a cape, have their underwear on the outside, or any intersection of the three. Even the book’s table of contents is an infographic!
“Super Graphic is my love letter to the medium of comics,” says Leong. “There’s people out there who are crazy fanatics, and I mean that in the best way possible, who just pour over comics, obsess about the data, and go to Comic Con dressed as their favorite characters. I wanted to show my appreciation by making something just as passionate and visible as they are.”
Whether you want to understand the comic book theory parallel Earths, the ways in which Bruce Wayne and rapper RZA are similar, the march and retreat of Wonder Woman’s hemline over time, or just figure out what is the best superhero-themed roller coaster on Earth, there actually is something for everyone in Super Graphic. You can buy it from Amazon here. 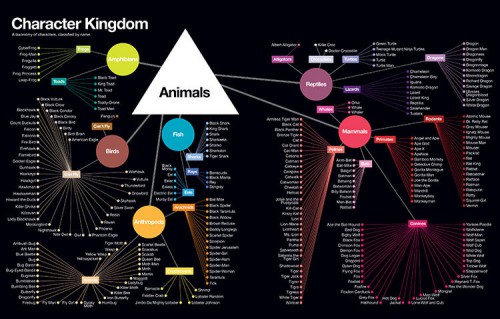 In this chart, Leong breaks down every animal-themed superhero or villain into a biological taxonomy of kingdom, phylum, and species. 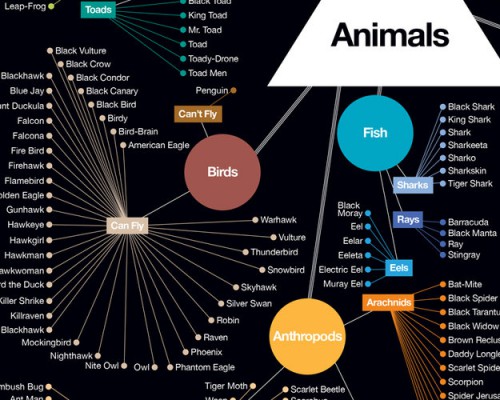 Leong says this chart was challenging because there’s not just a big list of every superhero animal. He had to research it all himself 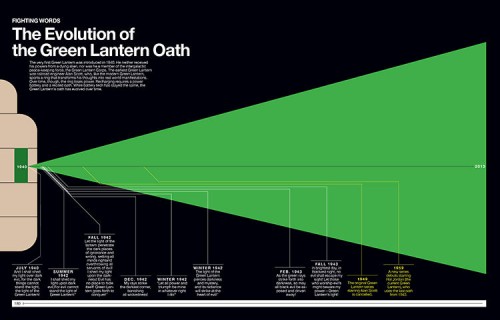 The Green Lantern’s oath has changed a lot over the years. 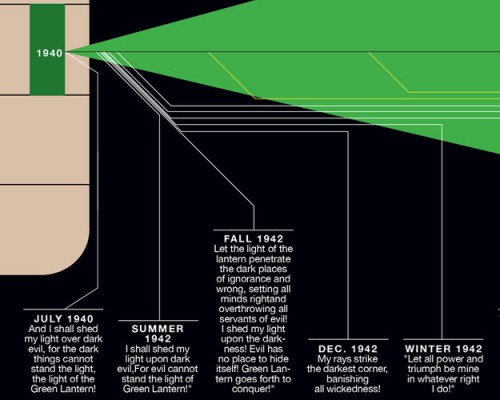 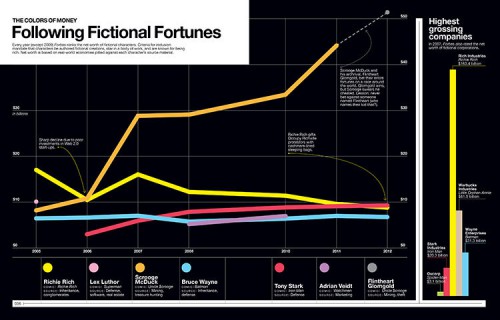 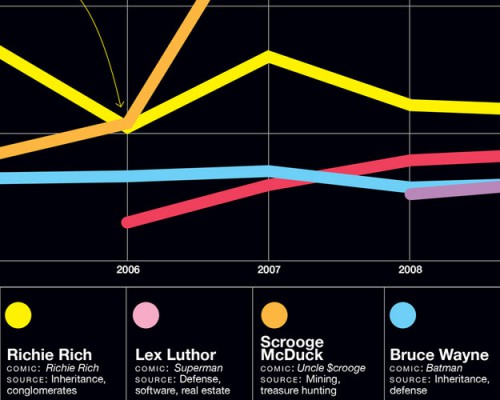